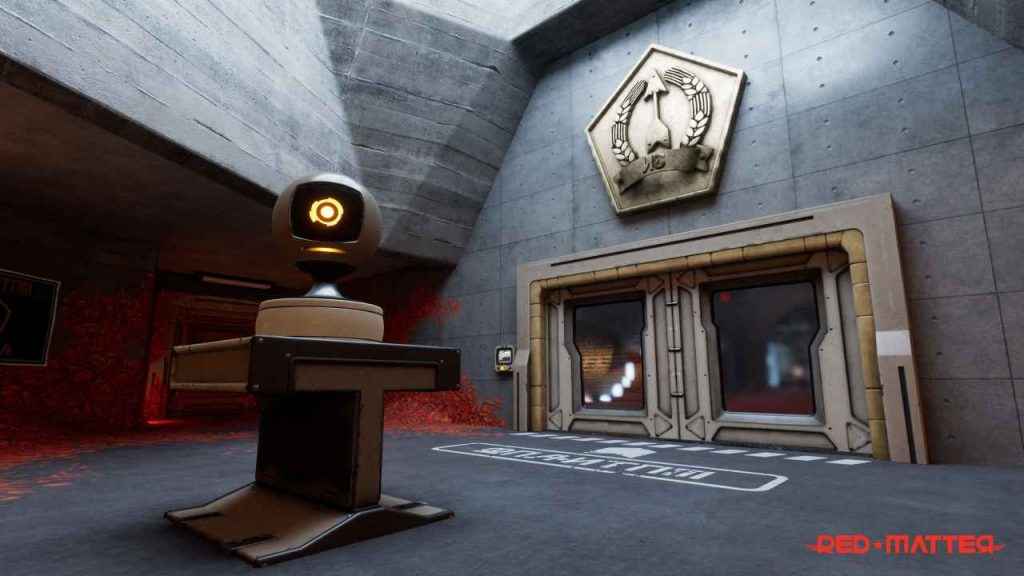 Coming around the corner, I see it. Rising up from the barren ground of one of Saturn’s moons, it sits there in all of its impossible majesty. The entryway to an underground Volgravian base rises from a silent frozen hillside, with all of the pointless splendor, pomp and circumstance that mark all official Volgravian structures.

Why, when building a simple entrance to a secret base on a moon – where no one will ever see it – would Volgravia feel the need to adorn the construction with propaganda art? Why would they need to make everything in such a way that – even way out here – anyone laying eyes on the entryway would have no doubt as to the far reaching power and demanding dignity of the Volgravian state?

Because that’s just how Volgravia does it, I guess. Why have a simple hole in the ground, when you could show the power of the state to anyone that just happens to drop by a moon of Saturn?

Playing Red Matter this afternoon, I was struck with a sudden thought: many modern gamers might not remember the Soviet Union. Sure, younger players are probably aware of the past existence of this communist behemoth from history class. But to many young people today, the Soviet Union is a distant, chilly relic that existed before their time, much like World War II or the Korean War feel to me.

But I very much remember the Soviet Union. As a teenager, I was one of the very few American citizens that actually visited Soviet Russia (I was involved in a perestroika-era student exchange).

As one of the few Americans to visit the U.S.S.R. at the time that I did, I spent many hours touring both historic landmarks and modern Soviet installations. I can attest that while the development team at Vertical Robot lightly mask their depiction of Soviet-era propaganda and policy by giving the Soviet Union a different name (Volgravia), they absolutely nail the stark look and feel of Soviet architecture, while remembering to pay mind to the richness of Russian culture.

They also wisely remember that existing within this looming, watchful monolith were real flesh and blood people with desires and failings, ambitions, wants, and needs like anyone else. And the fact that Vertical Robot is able to convey the humanity within the machine without ever putting a single character on screen is a minor miracle of storytelling.

In Red Matter, players take on the role of Agent Epsilon, an astronaut in the employ of the Atlantic Union. You have traveled to Rhea, a moon of Saturn to investigate the remains of an abandoned Volgravian mining and research base.

In this alternate universe, the super powers of the ‘60s and ‘70s have different names, but it is clear from the outset who is who. And while technology has advanced far beyond what we have in our present day, the Cold War never ended for the Atlantic Union and Volgravia.

While the true reasons for your visit to the abandoned base reveal themselves as the game progresses, your intentions in the installation are only part of the story. The previous occupants of the Rhea base experienced some mysterious difficulties, and piecing together what became of the Volgravian miners and scientists is one of Red Matter’s many pleasures.

As you move deeper and deeper into the base, the personalities of the people that were there before you slowly come into focus. At first, you simply start recognizing names. Nikolai is the security officer. Olga is the communications officer. Stas is in charge of maintenance, and so on.

But as the game continues and you slowly rifle through the remnants these people left behind when they abandoned the base, character sketches become more full bodied, until you have a much clearer picture of individuals’ connections, motivations and relationships.

All language in the base is written in Vertical Robot’s interpretation of Russian (no, its not real Russian, but on rare occasions it comes close). By aiming your multi-tool/scanner at any object, you will be able to see a translation of what is written. This mechanic makes the procedural storytelling much more entertaining, as the act of simply finding notes and memos laying around and translating them is fun.

In addition to your scanner, you are also provided with a dim flashlight (not much use, really) and a pair of claws that can be used to grip and manipulate objects in the environment. Though most of the puzzles in Red Matter can be solved by fiddling with levers and dials, the game has an advanced physics model in place that allows players to pick up mugs and pens and fling them around the environment. While unnecessary for the story, this really helps to sell the setting.

The puzzles themselves range in difficulty, but never become overly tough. I was able to solve a few simply through experimentation, but others required a bit more brain power. One environment (the habitat, for those playing the game) has such a bravura series of puzzles that when I finally solved them I literally sat in my living room and clapped. The moment that the solution to one particular puzzle dawned on me was frankly one of the best gaming moments I’ve had all year.

I would strongly encourage anyone playing Red Matter to avoid looking up solutions to the puzzles online, as you will only ruin the very satisfying moments of inspiration that this game regularly supplies. If you find yourself stuck, hit me up in the comments and I will drop you a hint.

Other teams developing VR titles would do well to study the control scheme presented in Red Matter. While the Dual Shock 4 is not supported, Vertical Robot supplies such an intuitive control scheme that I didn’t miss it a bit.

Both Move controllers are able to function with the above-mentioned claw tool, which is great for turning wheels or manipulating heavy levers. The left controller allows you to alternate between the claw, the scanner and the flashlight by tapping the various face buttons.

The right Move controller handles player movement, with an elegant motion control scheme. By pressing the top face buttons, players can indicate where on the floor they want to go. If the destination is close, you will simply warp there, but if the destination is further away, you will moon-jump over to it. This is a fantastic way to traverse long distances, and vaulting across giant distances never stopped feeling cool.

The lower buttons on the right Move controller handle snap turning, which worked fine for me. However, if none of that is to your liking, you can always just hold down the Move button on the right controller to glide forward, steering by actually pointing the controller where you want to go.

This control scheme is one of the best I’ve encountered for a PS VR game. It is intuitive, and allows players to move the way they want to, with enough fine control to adjust yourself in tight spaces. I’m a person that tends to get VR sick, and I never once felt even slightly uncomfortable while playing Red Matter.

Vertical Robot has also solved one of my biggest VR gaming pet peeves. In almost every environmental game, it is next to impossible to pick up objects after they have fallen on the floor. Since the floor is almost always out of the PS VR’s camera range, there is a great deal of flailing and cursing that usually goes on when trying to grab stuff laying around.

In Red Matter, you simply point one of your claw tools at the object in question, and a tractor beam of sorts reaches out and grabs it, pulling the object into your grip. The end result feels very much like “using the force”. After playing Red Matter, I will notice and miss the absence of what I am now dubbing the “Skywalker Mechanic” in every adventure game I play.

There are so many perfect visual flourishes in Red Matter that sell the setting that I almost don’t want to spoil them. When a reviewer is concerned about spoiling the decorations on the walls of an adventure title, you know you are in for a treat.

I will say that I greatly enjoyed the visuals in Red Matter. I found myself playing around on the elevator, just to watch the reflection of the overhead light dancing across the textures of the glass and wall. I also spent a bit of time staring at a concrete wall, searching for a repeating pattern in the texture (there wasn’t one).

I already commented on the awesome retro-future adaptation of Soviet-era architecture, but the art department deserves a shout out as well. The base is littered with propaganda posters, and they are realistic and well designed that it was frankly a little stunning. There are also a few mosaics that were deeply reminiscent of real world locations, and they are so beautiful that I found myself wishing that they existed in the real world.

I played Red Matter on a standard PS4. I know that the game is optimized for PlayStation Pro, and I am deeply curious to see what it would look like when playing on a Pro. Even on a standard PS4, Red Matter is already one of the best looking PS VR games I’ve played.

I don’t want to oversell Red Matter. It is, after all, a 2-3 hour puzzle game that has players solving environmental puzzles to move to the next room or area. If you have a PS VR, you have likely played a game of this type before.

Red Matter is simply the best game of the environmental-puzzle-adventure genre that I have played. While other games in this genre are sometimes lacking in one department or another (the story is lame, or the visuals are stiff and weird), Red Matter sets a gold standard that other games should aspire to. I loved it, and once it got going, I was compelled to beat the game in one sitting just to see how the story played out.

My concern for Red Matter is that gamers might take a look at its’ “investigate the abandoned base” storyline and write the game off as something pedestrian. It is most definitely not. For a game that takes place in an underground bunker, Red Matter contains beats of soaring inspiration and visual wonder, and more than a few mysterious “What the hell were they doing down here?” moments.

Red Matter is a game that clearly had a lot of thought go into it, and as a result the game has haunted my thoughts since I finished playing it. It is rare for me to replay games of this sort after solving the puzzles, but I’m going back into Red Matter just to get another look at the story.

Red Matter deserves some attention from adventure gamers, and PS VR gamers in general. It isn’t often that a game gets so many things right.

Red Matter delivers an intriguing retro-future cold war story with confidence. In VR, setting is half the battle, and Red Matter nails its Soviet-era underground bunker with a realistic visual flair. With achievable puzzles that never slow down the story and a great control scheme, Red Matter sets a new standard for the VR adventure genre. This is a game that deserves to break free from the crowd.