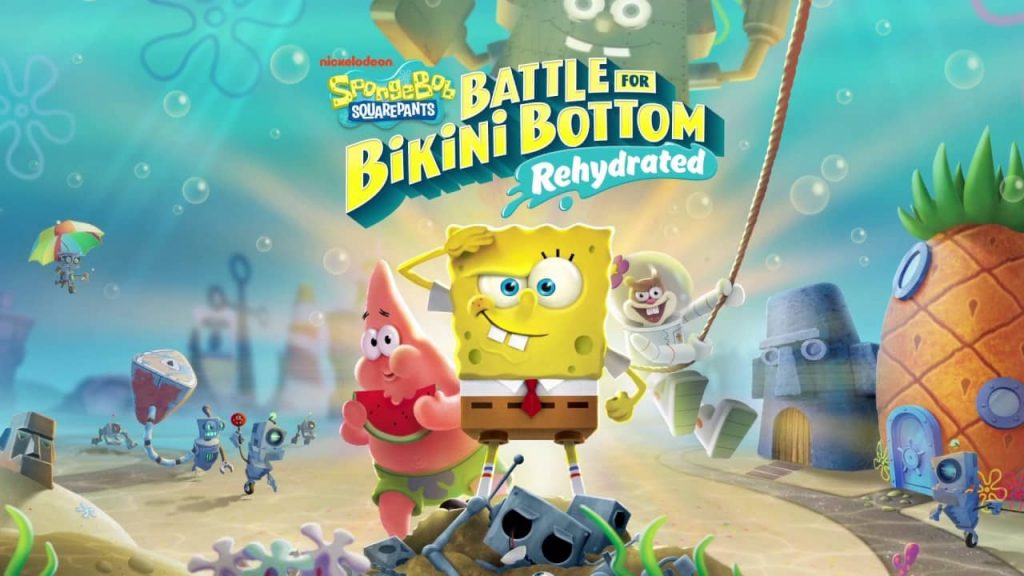 SpongeBob SquarePants: Battle for Bikini Bottom was one of the better platformers released based on a television or movie license back on the PS2. With it’s remastering, fans of the franchise and especially parents with children who love SpongeBob shouldn’t even think twice about picking the game up. It’s simply a no brainer that they should.

Battle for Bikini Bottom Features A Great Cast Of Characters

Battle for Bikini Bottom sees SpongeBob along with Patrick, Sandy, and the rest of the cast try and stop a robot invasion of Bikini Bottom. The robot invasion is, of course, a plan of Plankton’s that goes horribly wrong. Instead of being the robot master he accidentally unleashes the robots without programming them to follow his command forcing them to turn on him. He then decides to lend his assistance to SpongeBob to stop the robots.

The story feels like it’s part of the SpongeBob universe. What makes it so good is that the developers from 2003 took all the quirkiness of the franchise and Purple Lamp Studios has recreated it in the best way they could. The characters’ animations and personalities are perfectly recreated here. From SpongeBob’s goofy facial expressions to the humorous dialogue.

Graphically the game looks pretty good. It keeps the cartoony design of the show which also gives the game a lot of character. The animations, in particular, are stellar. It’s the attention to detail that I truly appreciate.

When Patrick jumps and does a slam attack from the air he peels himself off the ground like a flattened starfish. Another example is when SpongeBob enters an area that isn’t underwater his character model changes to look dried up and actually looks quite terrifying. Each character is voiced by the cast of the show and they do a stellar job here. It also helps that the writing is very strong and plays to each character’s personality.

Platforming Designed For Both Expert Players and Children Alike

Battle for Bikini Bottom is a platformer through and through. The various levels are designed to take advantage of each of the playable characters’ unique abilities. SpongeBob uses a spatula to do a spinning attack while Patrick just uses his belly to strike enemies.

Each stage not only has various enemies that block your path, but a lot of obstacles to try and get through. Platforming involves plenty of puzzle-solving but it shouldn’t be anything too difficult to get through. Most, simply require you to find a switch to activate but some will require precision timing when making leaps on utilising small movable platforms.

The developers took into account that the game is mostly designed for children so the hardest portions of the platforming and puzzle-solving simply lead to collectibles and the actual progression sections are left relatively easy.

Enemies come in all shapes and sizes and I was surprised by the variety I encountered. There are of course you’re simple grunts that just charge at you, but there are some that will shoot at you from long distance, some flying enemies that throw lighting clouds that follow you around trying to strike you, alongside many more.

Each stage requires using the specific abilities that characters have. SpongeBob, for example, can scale walls like a wall jump. He simply sticks himself to the side of the wall and pushes himself off to stick to another part of the wall. Patrick is the strong man of the group and is able to pick up objects and stunned enemies, throwing them around.

There are of course plenty of locations you aren’t able to reach early on because you haven’t unlocked the character necessary to reach certain areas or you haven’t learned the required ability.

One thing I didn’t enjoy was not being able to switch characters on the fly. Instead, you have to find a bus stop and switch characters that way. This can be a real pain as not every stage you’re in has a bus stop, forcing you to switch characters in a different one and return to the stage with that new character. This again isn’t a problem if you are simply trying to get through the game, but it becomes a major hassle for completionists looking to collect all the collectibles.

Plenty Of Memorable Locations To Explore From The TV Show

There is a slew of locations to explore in Bikini Bottom that fans will surely recognize. Goo Lagoon and Kelp Forest are just a couple. Each location is split up into various smaller areas, which keeps the game from being an open world, as each level has at least four sections to explore and get through. Each area will require you to collect a specific item or solve a puzzle to open up the pathway to your destination.

I wish the game featured some sort of fast travel mechanic to get to these areas faster. If you want to return to an area you have to go through the entire stage all over again. So if you want to reach the third location in a level you have to go through the first two. On a positive note, you won’t have to solve all the puzzles again as everything will already be opened up to you, but enemies will still try and hinder your progression.

Battle For Bikini Bottom is also a lengthy game for a platformer. it took me about 13 hours to get through the game without really going out of my way to find hidden collectibles. Collectibles are a big part of any platformer and Battle of Bikini Bottom isn’t any different. There are Golden Spatulas and Patricks Stinky Socks to find. These two collectibles are located throughout the entire game, but each level also holds it’s own unique collectibles to find as well. It’s just as addicting as you would think to find all the collectibles and completionists will surely enjoy every moment of it.

One Of The Best Uses Of A Popular License

SpongeBob SquarePants: Battle for Bikini Bottom – Rehydrated is a good platformer that I can say for a fact has made a fan of the franchise. The great writing and humor of the show are equally as good in Battle for Bikini Bottom. It does suffer a few hiccups along the way that I wish would have been addressed with this remaster but overall this game is a no brainer for fans of the franchise.

SpongeBob SquarePants: Battle for Bikini Bottom - Rehydrated is not only a good platformer, it's a great example of a game taking full advantage of its license. Fans of platformers will sure enjoy their time in Bikini Bottom, but fans of the franchise will gobble it up. Battle for Bikini Bottom features plenty of action and humor to carry you through the 15-hour campaign and some of its puzzles are definitely headscratchers, which is more than you can ask for in a solid platformer.