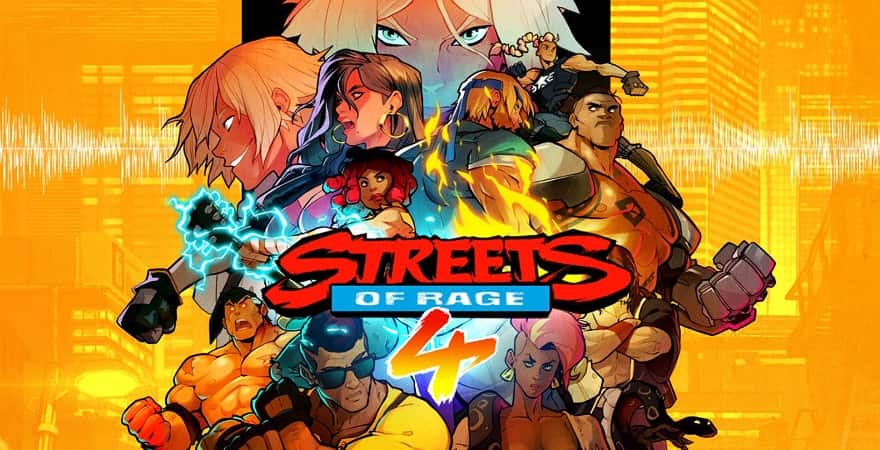 It was when a middle-aged and decidedly leathery faced Axyl crisply landed his trademark double jab, cross, mid-level and high kick combo that I knew developers Guard Crush Games and Lizardcube absolutely nailed the Streets of Rage experience with Streets of Rage 4. Even the most optimistic person would struggle not to admit that, arriving some 26 years after the last core entry in the series, Streets of Rage 4 has an absolute mountain of expectation to scale.

Thankfully all is more than well and in Streets of Rage 4, we have an offering that not only does ample justice to its legendary heritage, but one which also defines the side-scrolling brawler genre at large. Ladies and gents, cast your fears aside because Streets of Rage 4 is absolutely the real deal.

From the very second you start the game, the developers behind Streets of Rage 4 want you to know that they are in as much love with the legendary series as you are – if not more so. As the scrolling introductory text slowly makes its way up the screen while Yuzo Koshiro’s distinct 1990s score sets its melancholic urban beats in the background it indeed becomes apparent that, yes, Streets of Rage 4 is in the best of hands.

Once you’ve chosen your designated bruiser from the initial quartet available, it’s out onto the quite literal streets of rage to smash some skulls and right away the insanely stylish audiovisual presentation hits you like a Boomer boomerang to the noggin. Simply put, Streets of Rage 4 might well be one of the best looking brawlers ever made. Boasting the same level of radical visual transformation that Lizardcube lavished on other retro SEGA efforts such as Wonder Boy: The Dragon’s Trap and Monster Boy and the Cursed Kingdom, it’s no exaggeration to say that Streets of Rage 4 absolutely looks like the franchise in its ultimate form.

For a start, the character sprites are massive and have never looked better. Every frame of Axyl’s haggard stance is sublimely realised as is newcomer Cherry Hunter’s guitar riff infused beatdowns, while the environments have seen a similar technical and artistic upgrade too. Lighting for example, adds massively to the scene because if you walk close to a neon klaxon, you’ll see a cornucopia of colour splashed liberally across the head and shoulders of your character, while also puddles do a grand job of reflecting the action around them as well.

When it comes to the audio side of Streets of Rage 4’s presentation equation, it should come as little surprise that Streets of Rage 4 absolutely excels here too. With a frankly brilliant score boasting techno beats which not only evoke fond memories of the previous Streets of Rage games, but also stand resolutely solo as bangers in their own right (the Eye of the Tiger esque riffs of the fourth stage prove to be a particular highlight), Streets of Rage 4 is quite simply an audiovisual delight the likes of which the genre hasn’t seen.

Easily the largest entry in the series to date at 12 stages, Streets of Rage 4’s story based campaign is linked up by some fairly straightforward animated cutscenes, whose workmanlike presentation also neatly reflects the workmanlike story too. Though the audiovisual presentation does indeed soar then, it’s truly in the moment to moment side-scrolling brawling action that Streets of Rage 4 bullishly demonstrates just how formidable its calibre really is.

As mentioned at the top of this review, any Streets of Rage veteran worth their salt will sink into Streets of Rage 4 like a warm bath. The responsiveness, crisp snapping sound and sheer feeling of satisfaction when fist/foot hits the face of a foe absolutely mirrors that which we all (well, some of us) experienced nearly three decades ago, and yet, despite such an overwhelming feeling of familiarity, Streets of Rage 4 is certainly not reluctant to tweak and improve upon a formula that most Streets of Rage players would consider duly sacred.

The most significant way that Streets of Rage 4 shakes up the mechanical status quo of the series is in how it penalises the use of special moves. In the three previous games, each time a special move was used the player would lose a fraction of their health in turn. In Streets of Rage 4 the same thing happens, except now players can replenish the health lost from performing these moves by hitting the enemy – though the health will remain lost if the enemy lands a hit on you first. The only exemption to this system are the new ultimate attacks which deal huge amounts of damage to numerous enemies, but take off chunks of health that cannot be regenerated like this.

This creates a whole new dynamic in the game that makes the traditional moment to moment combat of Streets of Rage entirely different, as now you can go into combat knowing that you can use special moves and replenish the health mid scrap without having to hope and pray for a plate of roast chicken after the fight. Oh and on topic of roast chicken, one other welcome though nuanced tweak that Streets of Rage 4 brings to the table is that by setting item pick up and strike to different buttons, you can no longer accidentally pick up precious health giving food when you didn’t need to. At last!

Another significant change that Streets of Rage The Fourth makes to the series is in hazard-laden environments that the player is forced to fight through. Sure, in previous games we saw all manner of chasms and fire pits, but Streets of Rage 4 ups the ante considerably with electrified puddles, explosive chemical barrels and a host of other hazards to boot.

Elsewhere, other environmental elements are more nuanced. A fight in a damp floored sauna for example turns into an impromptu dance routine of sorts as friend and foe alike slide around on the slick surface in an attempt to find a footing, while another stage has players brawling on top of moving train where an occasional quick jump proves essential to avoiding the deadly signs that come speeding toward you.

One other way in which Streets of Rage 4 improves over previous games in the series is in the new combo juggling system. Though hardly a revelation when it comes to side-scrolling brawlers (last year’s excellent River City Girls employed it extensively, for example), in Streets of Rage 4 there was always the worry that having a juggle mechanic would somehow upset the porcelain delicate balance of the series combat system.

Happily, I can report that the opposite is indeed true, and in fact that new juggling system permits yet further mastery on the part of the player, allowing tenured series stalwarts to score a bunch of extra hits on their foes in a way that they couldn’t previously.

Speaking of enemies, though Streets of Rage 4 brings back many recognisable punks from past entries in the series (Big Ben *still* does his cheeky laugh after he knocks you down), it’s really in the new villainous faces that the game truly soars in this regard. New riot police enemies now use special force fields that must be smashed first before they can be hurt, while overzealous Karate students for example, can adopt a defensive pose that if attacked during this stance, automatically counters the player into a devastating throw or combo attack. In short, Streets of Rage 4’s new baddies will test the player like nothing they’ve experienced before.

Beyond bespoke looking enemies, the developers have also worked their magic with palette swapped enemies too. What’s interesting in this regard, is that color palette swapped enemies now sometimes have different abilities and attacks to keep you on your toes whilst also providing further variety to the horde that is attempting to take you down at every turn. Then there are the bosses. Never cheaply designed, each big bad has a clear weakness, is visually incredible and represents a considerable challenge in their own right, while one boss in particular has a special ability that brilliantly inverses something seen in the very first game in the series.

Though Streets of Rage 4 is undeniably challenging, it does make ample concessions to those who are new to genre, or otherwise not quite as skilful as they would like to be at it. In addition to the usual smattering of difficultly presets, Streets of Rage 4 also provides the opportunities for players to use special modifiers when they expend all their lives, including those which add an extra life to your total, but also half your score. Such things might seem trite, but to folks who can often find themselves put off by the unyielding difficulty seen in other examples of the genre, such overtures to the less experienced arguably represent a breath of fresh air.

Beyond its impressive story mode, which as ever is best enjoyed cooperatively with a friend either locally or online, Streets of Rage 4 leverages a score based progression system which provides retro character versions and other bonuses to keep you playing after credits have finished rolling. It’s not earth shattering stuff, but it does provide plenty of incentive to keep playing besides the usual trophy hunting shenanigans.

In terms of other modes, there is Arcade (one credit and no saves), Boss Rush (does what it says on the tin) and Battle (a local arena PvP affair). Of the lot, Boss Rush and Arcade hold the most allure for completists, while Battle feels a little neutered compared to the rest of the experience because, arguably, Streets of Rage has always been about mashing up legions of thuggish goons rather than each other.

In a way it’s fitting that the series that heralded my interest in side-scrolling brawlers all those decades ago has now closed the loop. Streets of Rage 4 is sublime example of a developer walking an almost invisible tightrope of maintaining the essence of a classic series, whilst also meaningfully iterating upon the core experience to push the whole package forward. There’s no other way to say it – Streets of Rage 4 sits at the apex of the side scrolling brawler genre and must be experienced immediately.

Streets of Rage 4 releases for PlayStation 4, PC, Xbox One and Nintendo Switch on April 30, 2020.

Streets of Rage 4 is an absolute masterclass in maintaining the essence of a classic but also in reimagining certain aspects of its design DNA for a contemporary audience. Streets of Rage 4 is without doubt the best side scrolling brawler you can get on any system.