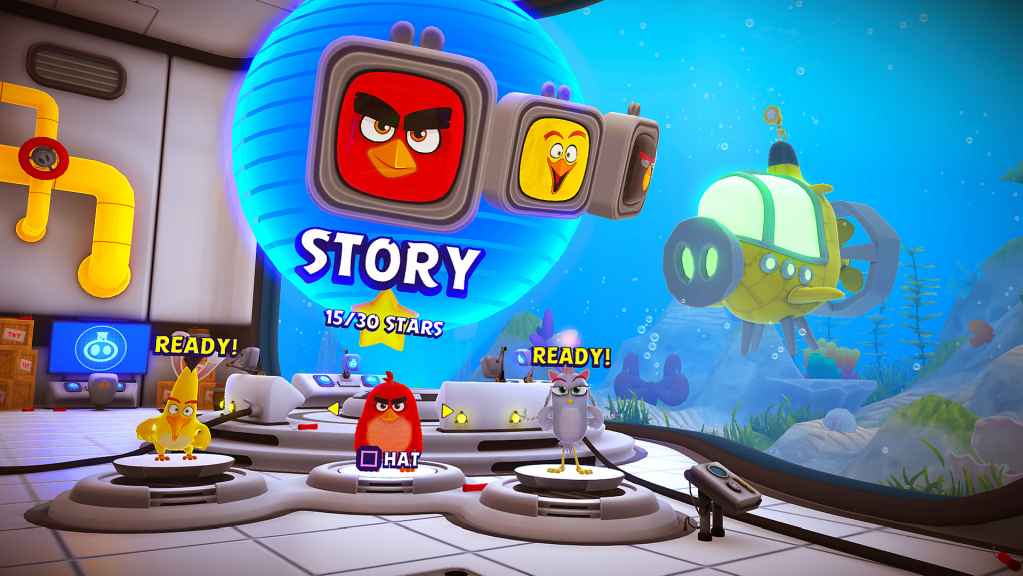 With umpteen titles released beneath the Angry Birds franchise banner, most gamers probably know what to expect when they pick up the latest Angry Birds game. Indeed, the Angry Birds VR title released earlier this year offered a successful VR translation of this tried-but-true mechanic, with players flinging various birds at Jenga-block castles in a never-ending quest to murder green pigs.

But strangely, The Angry Birds Movie 2 VR: Under Pressure (and that’s the last time I’m typing out that convoluted word salad) completely abandons the hallmarks of the franchise, instead opting for an Overcooked-style multiplayer free-for-all. Is the new game style successful within the trappings of the franchise? Well…it depends on who you are playing with.

Casting aside Angry Birds’ origins in the video game space, what Angry Birds 2: VR represents is your standard licensed franchise game, for better or worse. A familiar property has been mashed together with a recognizable game formula, with the wrinkle of VR thrown into the batter to mix things up.

While the “inspiration” that Angry Birds 2 lifts from Overcooked is obvious, the team behind AB2 choose well when selecting a genre to emulate. Like Overcooked, Angry Birds 2 has some fun, accessible levels that families can enjoy together. Though (also like Overcooked) eventually the difficulty ratchets up to the point where littler players will be left behind – or in tears of frustration.

If You Don’t Crush Pigs, What Do You Do?

I haven’t seen the second Angry Birds film (and let’s face it, I’m not gonna until it shows up on Netflix), but judging from the trailer that Angry Birds 2 VR invites (forces) you to watch before playing the game, I’m guessing that the titular birds have reached some sort of armistice with the villainous green pigs.

None of the plot really matters – the bottom line is that in Angry Birds 2 VR, the pigs and birds are together on a submarine, heading to a place to do a thing. Along the way, for whatever reason, they have decided to collect as much treasure as they can (I’m not certain this is a plot element of the film…it seems a little video-gamey).

In order to gather treasure, one player straps on the VR helmet and acts as the submarine “captain”. The other players become the “crew”, playing on the TV screen while the captain attempts to wrangle them and prioritize their actions.

The captain is responsible for gathering treasures as they slide past the submarine, visible only to them through a massive window. Treasure is gathered by firing a plunger at the chest, then jamming on the “x” button to reel it into the ship.

At the beginning of the game, the crew is responsible for building plungers and loading them up. This is accomplished by carrying various brightly colored cubes to various machines, then waiting for them to spit out the desired product, then picking up the product (also in cube form), and placing the new cube into another machine. Most of this is handled with just one button, which makes the control scheme easy to master for younger players. The captain can also assist in some of these chores, flinging stuff around the deck as needed (with some restrictions).

Complications ensue as players work through the initial eight campaign levels (there are over thirty levels in all, gradually unlocking via Angry Birds’ patented star system). New mechanics are added with breakneck speed, with both the captain and the crew picking up new jobs and responsibilities to keep track of in every level.

Suddenly, there are torpedoes to build, and treasure to be condensed into more valuable treasure, and junk to clear off the deck, and TNT to be disposed of into the furnace (because treasure chests sometimes contain boxes of dynamite. Duh.). What starts as a simple and manageable family game quickly descends into a frantic free-for-all, with players yelling at each other to accomplish what they feel is the top priority, while in reality, there are ten different equally important tasks that all need done.

Playing A Family Game With A Family

Though it is technically possible to play Angry Birds 2 VR as a single player game, I absolutely would not recommend it. If you were looking to buy this title to play by yourself – don’t. The first couple of levels are doable, but after that you will be snapping your DualShock into little pieces in frustration. This is a multiplayer title, and should be approached as such.

The focus audience for The Angry Birds film series is kids ages 2 – 12, so I decided that I would attempt to play Angry Birds 2 with some of the kids in my family. I initially started playing with myself in the VR seat, with a six-year-old and a 16-year-old handling the TV screen duties.

The results were about what you might predict. The 16-year-old and I struggled to complete each level with growing frustration, while the six-year-old ran around in circles giggling and attempting to help. Out of the three of us, the six-year-old had the most fun, merrily changing characters and trying on hats while the 16-year-old grew more and more frustrated at the increasing difficulty.

We eventually assigned the six-year-old the job of “putting away the treasure”, which was within her abilities and made her content. In the end, the 16-year-old and I decided that we needed at least one more “real” player to make Angry Birds 2 VR more manageable.

Do I think that a team of little kids could accomplish anything in this game? Absolutely not. Much like the Angry Birds franchise that spawned it, Angry Birds 2 VR is hiding some serious difficulty under its kid-friendly veneer. Little ones will have a blast running in circles for a while, but don’t expect them to get anywhere.

Whereas Overcooked gently ratchets up the difficulty over a series of levels, there are enough levels in that game to have an ebb and flow to the frustration level. The eight-level Angry Birds 2 VR campaign is simply too brief to have that gentle slope, instead slamming players in the face with sudden lurching leaps into heavier difficulty. Instead of excitement, each new mechanic was greeted by my crew with groans. I’m not saying the game should be dumbed-down for kids, but a more gradual difficulty curve – elaborating on ideas before presenting the next – would have been very welcome.

That said, after playing through the more difficult levels and barely squeaking out the one star needed to progress, my little team was able to go back to earlier levels (that we had struggled with initially) and bang out a three-star performance with ease. Practice makes perfect, I suppose.

What we are left with is a game from a kids’ franchise that kids might be unable to successfully play. If you are interested in trying Angry Birds 2 VR, I would highly recommend stacking the “crew” with at least one or two experienced gamers, who are able to carry the load and pretty much ignore any little kids that might be having a blast lurching about on the deck of the sub.

Angry Birds’ decision to leave its core gameplay behind for this movie tie-in is interesting, and not altogether unsuccessful. But in creating a game with this rapidly ascending level of challenge, Angry Birds’ submarine may be leaving its core audience stranded back on shore.

The Angry Birds Movie 2 VR: Under Pressure is now available at the PlayStation Store.

Like the original franchise that spawned it, The Angry Birds Movie 2 VR: Under Pressure starts out simple enough but quickly ramps up in difficulty to the point where it where it will exclude its target audience. On its own, Angry Birds 2 is a fine Overcooked clone, but beware if you plan on playing by yourself or with little kids. At least a couple of experienced gamers are required if you want to see any of the late-game content.