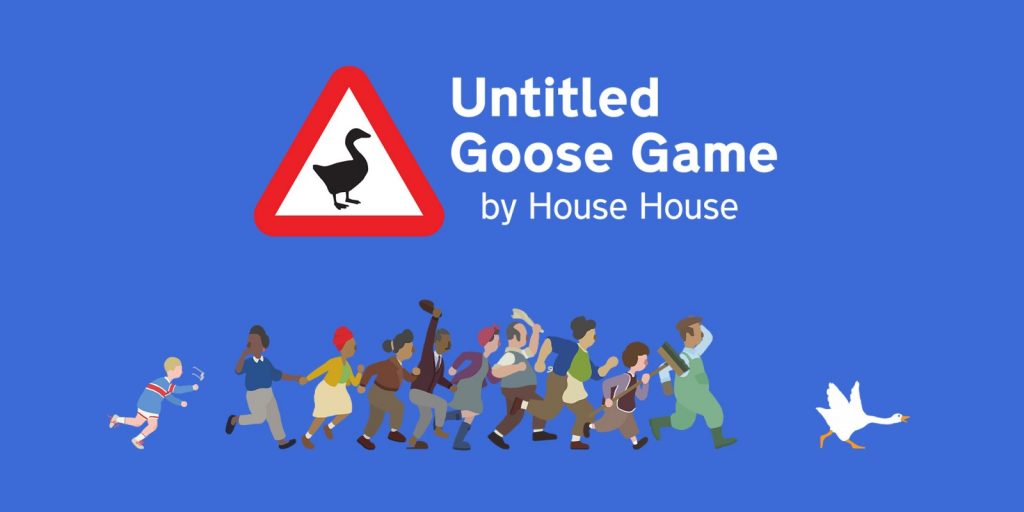 If you had told me one year ago that one of the biggest gaming icons in 2019 would be a naughty goose with a penchant for weapons grade trolling, I’d have stared at you frankly agape at the madness which would have taken you. As it turns out though, Untitled Goose Game does much to honor its lofty position in the estimation of many, turning in a wholly enjoyable, if somewhat slight comedy sandbox that gestures towards a more fleshed out offering further down the road.

Amusingly, Untitled Goose Game begins as it means to go on – prompting new players to press the square button in order for the titular cheeky goose to vocalise its iconic honk as they shout their way into existence. Once started, the circle button is your means with which to interact with the world, allowing our pestiferous protagonist to ring bike bells, open doors, pick up items and much more besides.

Viewed from an elevated third-person perspective, as an a-hole goose your job is clear – make as much trouble for the inhabitants of a sleepy, rural village as you possibly can. From dragging gardening tools into the lake, to stealing a picnic, honking at just the right moment to get a poor man to hammer his thumb by accident and making children cry, Untitled Goose Game lets you vicariously live out those deliciously evil goose fantasies you never knew you wanted to act upon.

Luckily, all this wanton chaos is underpinned by a structure of sorts. Though you are free to wander around and annoy whomever you like, there are a list of tasks for you to complete in order to keep you focused. To keep things interesting, some tasks that you have to complete have no clear or obvious way to see to their end, and it’s here that Untitled Goose Game is at its most clever in forcing the player to think a little outside the box and take full advantage of the oddity-stuffed sandbox realm that developer House House has created.

Need to sneak a pumpkin out of a garden? Drag it through the bushes unseen, or, distract the gardener by stealing something else and dropping it far away – causing him to go on a trek to find it and thus, leaving his precious pumpkins unguarded. For a game that seems so narrow in scope, at least initially, Untitled Goose Game permits a surprisingly amount of player creativity.

The absence of any real fail state also makes Untitled Goose Game something of an unexpectedly competent entry for younger folks who might be new to the stealth genre, since they are free to make as many mistakes as they like whilst they shore up their clandestine acumen. Indeed, if the humans chasing you manage to catch up, no harm is done to our feathered friend – instead they merely shoo him away, allowing him to return and recommit to his nefarious acts in earnest.

One of the most unexpectedly satisfying aspects of Untitled Goose Game is the handling of the goose itself. Surprisingly sophisticated, the bottom heavy modelling of our annoying avian means that its default walk is a surprisingly weighty waddle, in which the heft of the creature is keenly felt as it shifts from side to side with its iconic gait. Beyond such bespoke waddles, the goose’s physical modelling also means that when dashing, its turning circle is extremely wide – demanding that players take account in advance by taking their foot off the gas, so to speak, rather than struggle in vain to correct their course when the bird is in a full run.

The gentle accompanying score underlines the fact that this is very much a wholesome, relaxing offering too, but it also a functional purpose, as the energetic piano scales kick in whenever the goose steals an object and finds itself being chased, creating a sort of 20s Charlie Chaplin esque slapstick spectacle in the process. Beyond the audible realms, Untitled Goose Game duly impresses from a visual standpoint.

Though simply detailed, the goose itself is stunningly animated – with all manner of flair and flourishes contributing to a highly realistic depiction of the bird’s movements. From its spirited, weighty waddle, to how the goose stretches its neck to get under obstacles to the manner in which its wings unfurl and spread, Untitled Goose Game certainly has the best looking and best animated goose in the business.

Where our cheeky goose comes undone is in the width and breadth of his escapades. With no other content or modes than its singular campaign, which clocks in just a little over three hours, it’s something of an inarguable point that Untitled Goose Game needs a little more meat on its bones in order to elevate it into something beyond a mere conceptual curio. As it is, it’s entirely possible to see the game through from start to finish in a single sitting.

Despite such concerns over its length, it’s easy to see why Untitled Goose Game has captured the hearts of gamers everywhere. With its own brand of delightfully impish humor, even the title (such as it is) – ‘Untitled Goose Game’ speaks to a certain sort of irreverence that few other games seemingly possess, and ingenious stealth sandbox shenanigans, Untitled Goose Game is a highly enjoyable curio that everyone should set aside some time to play.

Untitled Goose Game is out now on PS4, PC, Xbox One and Nintendo Switch.

Though this is one bird that requires more meat on its bones, the meagre length of Untitled Goose Game isn't enough to greatly detract from the impish comedy and free-roaming sandbox shenanigans that define it as one of the most enjoyable games of the year.