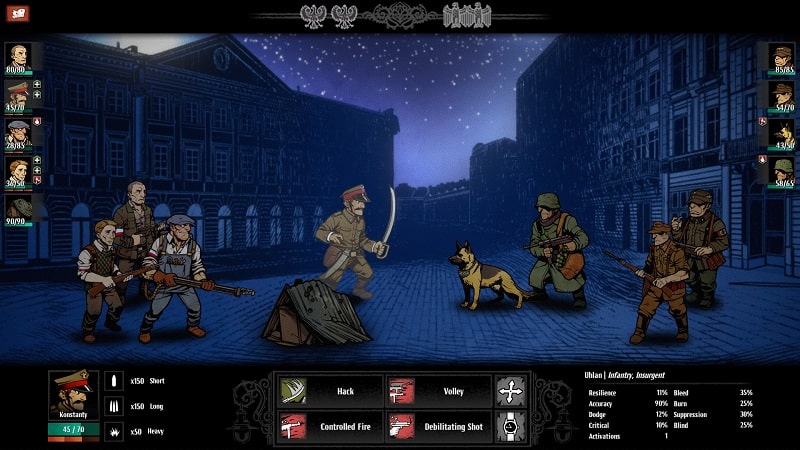 WARSAW PS4 Review – WARSAW joins a growing list of games that use historical violence to educate more than entertain. In this case, it’s a strategy game set during occupied Poland during World War II, where you organise a ragtag resistance in hopes of escaping from the bootheel of Nazi Germany.

These are not soldiers under your command, but ordinary citizens, young and old alike, pushed into fighting back and overthrowing the Nazis, and if that wasn’t hard enough, they are also massively outnumbered and outgunned. It’s not the brightest outlook for a video game, and a quick glance at the actual history behind WARSAW won’t make you feel any cheerier, but it’s a hugely important backdrop for what makes WARSAW tick.

A Stirringly Emotional And Deep Turn Based Battler

The game itself plays and looks like a hybrid of Darkest Dungeon (in terms of visual style and combat) and This War of Mine (everything else, including tone). battles are played out on a grid, with Resistance characters for the player sitting on the left, while the Nazis occupy the right. Each side takes turns to inflict damage, while each person in the resistance and the Nazis have their own traits and abilities that cause various area of effect damage, as well as buffs and debuffs.

Mixing these skills in the right manner for squads is key to relative victory, but ammo smartly acts as action points in a way, so there’s no real superstar squad you can assemble, just whatever your limited resources happen to allow.

WARSAW doesn’t hide all that much from the brutal reality of its subject matter. While the Polish citizens lack much in the way of military training and must scrape by, picking up most of their equipment (and importantly, ammo) from dead comrades and the enemy, the Nazis are accurately shown to be a ruthless, death-dealing juggernaut with plentiful means of trampling over your pithy resistance.

As a result, you’ll see a lot of death and failure, even when having relative success. Squad-based strategy such as XCOM has made a big deal of the fact your soldiers are expendable whether you like it or not, but WARSAW takes that to a whole new level. You can easily get attached to particular soldiers, especially given their hopeless plight, and it’s a grim, sometimes upsetting thing when the sheer weight of the stacked odds engulfs them.

It’s fair to say that, especially in my early hours with the game, WARSAW walked the line between keeping up the feeling of devastation and futility and being a bit repetitive and frustrating. It’s toughness is necessary to the overall tone of the game, so it’s not that it’s needless, but when failure hits time and again, it dilutes empathy for the plight of the resistance just a little bit. It doesn’t help that the randomised characters are more flagrant fodder than fleshed-out friends.

It’s a brave game that not only embraces failure as the key draw, but makes that failure an absolute certainty. The point is to fight back against evil for as long as you hold breath in your lungs, even though it may feel pointless. You’re always made aware of just how crucial your every move is, and that even if you try your hardest to outsmart the enemy, they can have an unpleasant ace up their sleeve, but there’s not quite enough short-term joy to be had from triumphs, instead there’s just a sense of relief.

For all the brutality on display, there’s not quite enough visceral horror to how combat looks. It’s not exactly a faithful visual representation of the history behind the game, and perhaps that was, understandably, a line too far for developer Pixelated Milk to cross. As such, WARSAW maintains a balance between education and entertainment, but it could be argued it loses something by trying to make it so much of a traditional video game. Don’t get me wrong, WARSAW really does well in its portrayal of fighting against monumental adversity, but it’s a touch compromised by its combat mechanics, sleek and efficient as they may be.

Outside of the combat, you’re charged with igniting the full-scale rebellion needed to finally overthrow the Nazis. This is where the game takes inspiration from This War of Mine. It’s here where the plight is driven home, as you see quite clearly that these freedom fighters are nothing more than impoverished civilians armed with little more than grim, stubborn defiance.

Nothing in WARSAW is quite as effective at showing how desperately grim things are as seeing your failures coldly represented onscreen during these parts. Thanks to the uneven application of the tone elsewhere, it doesn’t hit as hard as its key influence is able to do, but it’s undeniably good at it. WARSAW doesn’t quite deliver on its initial promise then. The way it looks and its thematics are its hooks, but there’s clear examples of both being done as good, if not better, elsewhere, so those hooks don’t dig in as deep as they could.

Still, you shouldn’t take that as a dismissal of what WARSAW does do well. It still has a lot to say about an important historical event, and manages to be a solid video game with it.

WARSAW is out now on PS4.

A solid turn-based strategy wrapped up in a grimly intriguing slice of wartime history, WARSAW is quite capable of having its intended emotional impact land on target. The biggest roadblock that faces is in the balance between being a video game, and being a powerful bit of storytelling about a real-life tragedy.