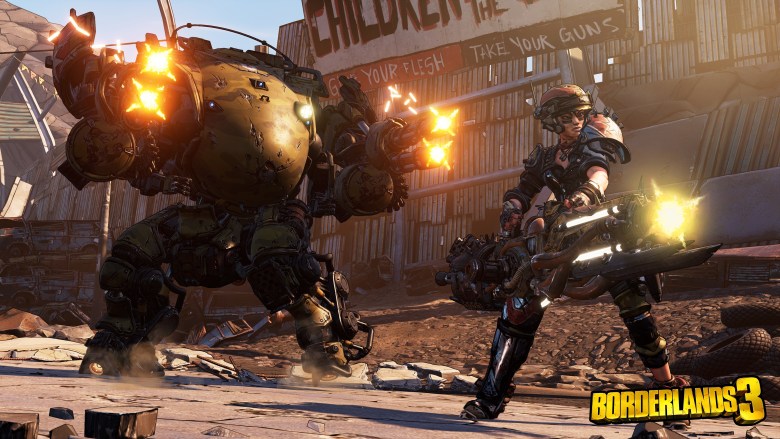 The studio behind the much-anticipated Borderlands 3 is continuing to provide new details on the latest Vault Hunters to join the loot-shooter, with today’s character-driven video introducing Moze the Gunner as the newest addition to the cast.

Earlier this week, Gearbox offered details on Zane Flynt, so if you haven’t seen him yet, be sure to visit our earlier story. We also got a look at a new location, Promethea, so check that out, too.

Moze the Gunner is joined in Borderlands 3 by her iron mech, Bear. Check out the trailer below.

Gearbox confirmed earlier today that Borderlands 3 has gone gold, so we shouldn’t expect any delays ahead of its scheduled launch on September 13 for PlayStation 4, PC, and Xbox One.

Borderlands 3’s game length has been revealed, and from the sound of things, it’s going to be quite a whopper. In addition, microtransactions are also part of the package, but they’re only available for cosmetic items.

Curious for more info about Borderlands 3? Check out the official blurb below, and then have a butchers at our hands-on preview here.

Borderlands launched back in 2009 to critical acclaim, and was followed by Borderlands 2 in 2012 and Borderlands: The Pre-Sequel in 2014. The sequel has been ported to the PlayStation Vita and also received PlayStation VR support in recent years. In addition, Telltale Games produced the brilliant episodic spin-off, Tales from the Borderlands, between 2014 and 2015.

The series has proved a massive success for publisher 2K, shipping over 43 million copies worldwide. No doubt Borderlands 3 will also pull in the punters when it hits shelves this autumn.