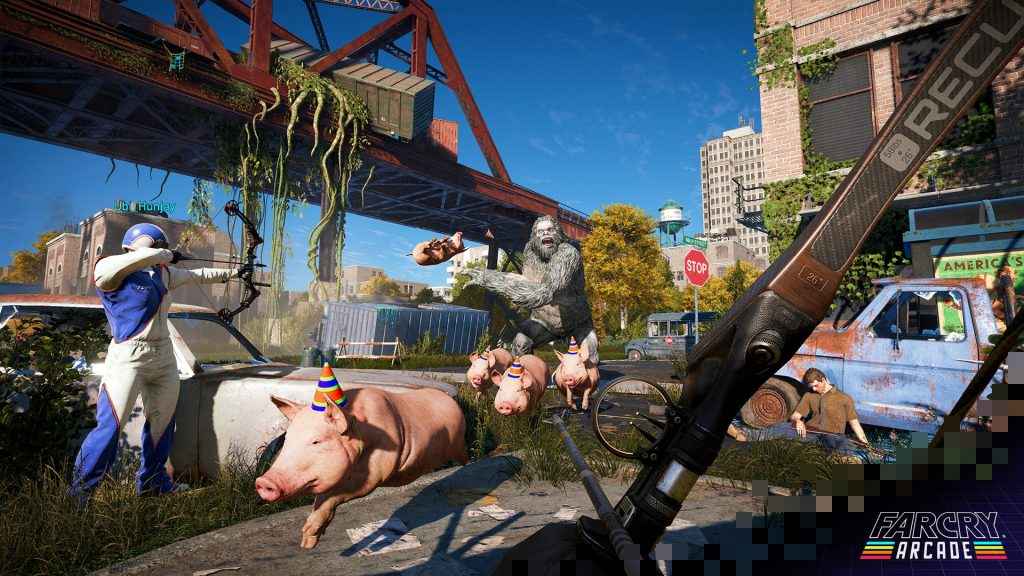 To start playing Far Cry Arcade, it's not immediately obvious, but it's well worth the effort! Boasting maps made by the community with the Far Cry 5 map editor, it extends Ubisoft's action-adventure significantly outside of the main campaign.

What is Far Cry Arcade?

With a broad selection of assets from within Far Cry 5, you can make custom maps with modifiers and place them in Hope County. There's over 9,000 objects to choose from and some of these items come from other game worlds, including Assassin's Creed Black Flag, Assassin's Creed Unity and Watch Dogs.

You can create maps offline, but you'll be to be online when you play them. More Far Cry Arcade DLC will be available post-launch. You can access Far Cry Arcade from within the game menu, and arcade booths dotted around Hope County. There's also posters you'll see around the game world, which you can interact with that give you quick access to some of the best featured maps.

As well as creating your own maps and being able to share them with the community, you'll also be able to access other user-created Far Cry 5 maps. There are six games modes in total.

Once you've created your map, you can then set the type of game. They include:

Assault: The aim is to defeat every enemy on the map. Watch out for new enemy waves and win the game when you've killed the last man.

Bounty Hunt: Look out for marked targets, hunt them down and kill them. Once you've completed that, head to the extraction zone.

Journey: The idea with journey is to give players the chance to explore. Start off at point A and make your way to point B to complete this mode.

Outpost: Attack an outpost and defeat all enemies. Map creators can set modifiers for a tougher challenge, such as having to complete this mode without being detected.

There are two multiplayer modes that you can create in Far Cry 5.

Deathmatch: Up to 12 players battle to the death. The match is timed, so the player with the highest amount of kills will win.

Team Deathmatch: 6 versus 6 matches with the highest scoring team winning when the time runs out.

What Modifiers Are Available In the Far Cry 5 Map Editor?

There’s a good selection of modifiers, so we’re expecting to see some great community-created maps. They include:

How To Unlock and Play Far Cry 5 Arcade

This game mode is not available from the start. You need to complete the game's intro and liberate Dutch's Island. From that point, you'll be able to access the in-game editor and user-created maps from the menu, or arcades in Hope County.

Can I level Up in Far Cry Arcade?

Yes, character progression crosses over from the main campaign and vice versa. That means that all perks and money carried over remains, and anything you earn in Arcade mode comes back with you to the campaign.

You can access the Far Cry 5 map editor offline to create your maps, though you’ll obviously have to be online to play them or share them.