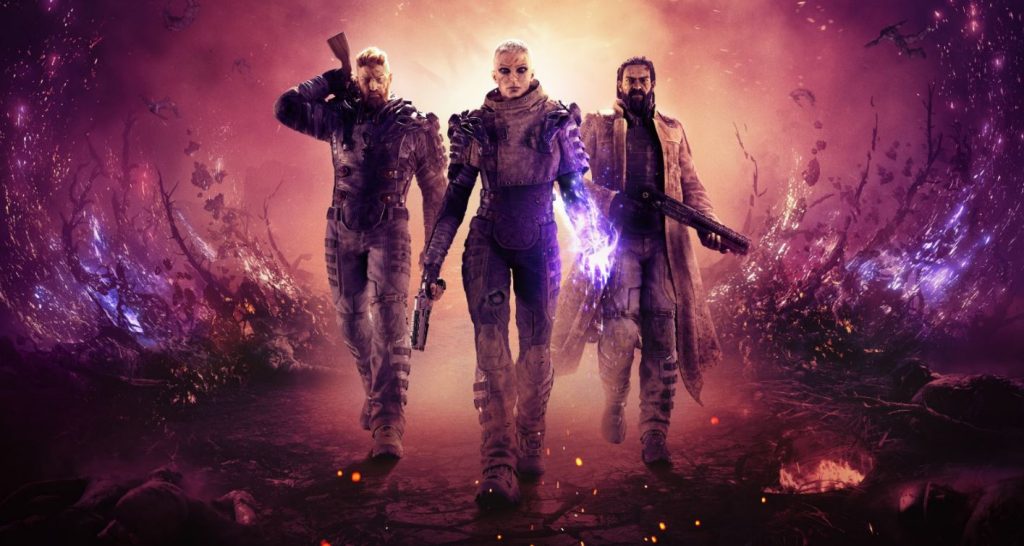 People Can Fly haven’t released a new game in almost seven years and many, including myself, have been looking forward to seeing what the team will do next. And, the game the team has chosen to make is Outriders, a 1-3 player co-operative third-person shooter set in a dark fantasy world.

After playing three hours of the game last month, we saw a lot of promise in the title, with its story, gameplay focus and foregoing of traditional live-service trappings. And, as it is launching this Holiday (the same window as the PS5) Outriders has a lot of potential to succeed and take advantage of the next generation of consoles.

A New Beginning For Humanity

Earth is gone and in the last few years of humanity’s existence, an emergency plan was created to send two colony ships to the unexplored flourishing planet known as Enoch. After 80 years of travelling with the crew, suspended in cryosleep, only one ship “The Flores” makes it to the planet intact.

As an Outrider, you are a pioneer and explorer leading humanity’s colonisation effort. Shortly after, you discover a signal coming from the planet and decide to find where it is coming from. On the way, a storm kills a sizeable amount of your crew and you are forced to return to cryosleep after becoming wounded. 30 years later you awaken to discover that the storm (called the Anomaly) has ravaged the planet and the remaining colonists are stuck in a civil war against each other and The Altered, twisted contortions of humans and animals that have died by The Anomaly.

As you were wounded in the Storm, you are also Altered, imbued with a dark power, that allows you to pull off destruction and chaos no human ever could. With the signal still present you and the remaining Outriders, track down its source.

Our demo picked up after we awaken from Cryosleep and takes us on the first mission of the Outriders’ journey. The game is a linear experience and features a set number of levels to explore. These levels are not entirely corridor based, with small side areas housing loot caches, side missions and bonus bosses. But, you aren’t going to find anything like Destiny here. The only people in the level are yourself and the Outriders you party up with in co-op.

There also appears to be no shared social space, with People Can Fly introducing new bases and encampments as you progress through the game’s campaign. These encampments have characters to talk to, vendors to buy gear from, and even optional dialogue choices and conversations to engage in.

Therefore, Outriders feels like it has its roots in People Can Fly’s previous traditional shooters, such as Bulletstorm and Gears of War: Judgement, rather than the industry’s newfound interest in live-service, shared-world shooters. We were also told that the game won’t feature any kind of pay-to-win mechanics or lootboxes for gear. These are all good things in my book and People Can Fly have been working on Outriders for almost four years now, suggesting that there will be a sizeable chunk to do.

I can’t say much for where the story will go, but it seems to be operating in a similar realm to other modern-day shooter campaigns like Destiny 2 and The Division 2. It s nothing groundbreaking, but it serves as a nice backdrop for the gameplay.

Succeeding Where Others Have Failed

When it comes to the gameplay, shooting, enemy design, and practically everything that involves playing Outriders, the game is looking to succeed where others have failed and floundered.

Weapons have a weighty feel to them and each shot pops and cracks with a satisfying punch. Whether it is the accuracy of an assault rifle or the firepower of a shotgun and LMG, each weapon feels engaging to fight with, unlike some other third-person shooters *cough* Anthem *cough*. A lot of the weapons we were giving were base models, but we did get a glimpse at some late-game weapons which feature unique abilities, buffs, and attributes. Those weapons also look incredible with some great modelling and effects.

On top of weapons, Outriders are granted a host of powers and abilities thanks to them being Altered. These abilities are split into four classes, although we only saw three of them. Each fills different roles and has a host of unique abilities you can switch between to tailor them to your playstyle. The Pyromancer focuses on fire damage and medium-to-long range attacks., with the ability to mark enemies and cause them to explode into a ball of bones and blood upon death.

The second class is The Devastator, which I got the least time with. This is the typical ‘tank’ class and allows you to rush up close and soak up as much damage as you can. The third class is The Trickster, which manipulates time and space to teleport in and out of fights and slow down enemies.

Each of these classes feels distinct and the effects on some of the abilities are truly stunning, with bright red Pyromancer flames travelling along the ground and the Trickster’s shining blue slow-mo field looking particularly glorious. With three players these effects can get a bit too gaudy and I can’t imagine the game would run too well on a regular PS4 when there are seven thousand explosions and particle effects happening in one concentrated area. But, we will have to wait and see. If you want a full breakdown of the classes check out our article on all three of them.

The game also has some satisfying but not overpowering gore, with bones flying through the air as enemies get fried and patches of skin being flung in all directions as an enemy explodes. The gore was amplified by the fact that the enemies we fought against would explode if you killed them with a headshot, which I found as funny as it was bloody and reminded me of the personality and vibrant combat in Bulletstorm.

The majority of the enemies we fought were humanoid figures, however, we did get a glimpse at some more unusual creatures in a trailer, including a crow made out of black sludge and an enlarged dog with more teeth than you can count. So, hopefully, the enemies change with each level to keep the experience fresh and engaging.

Outriders also features a lot of bosses and we got to fight two of them. Both of them put up challenging fights and reminded me of Destiny Bosses, with their large health pools and variety of attacks. In 3 player co-op, both of them were a great deal of fun to fight and we came out with a narrow victory both times, which added a bunch of adrenaline to the fighting. However, some balancing will still need to be done as another journalist told me that they couldn’t beat one of the bosses on their own due to its insane difficulty.

People Can Fly have also packed a lot under the hood of Outriders that seems like it could keep people playing for days, weeks, and maybe even months. Each class can equip three skills at a time and there was a choice of eight in our demo (although we could only get our hands on the first three to five).

Each one adheres to a different strength within a class and abilities can synergise between different classes as well as within the same class. So, theoretically, you could roll with three Pyromancers and torch the environment and enemies to smithereens with a ridiculous level of power.

I have already mentioned the variety of weapons, but armor can also be looted from enemies and caches. The designs seem as, if not more unique than the weapon designs and I can’t wait to deck my Outrider out in some twisted gothic gear. All of this gear can be equipped and changed within a menu that is virtually identical to Destiny, which isn’t a bad thing as Bungie’s UI has won awards.

On top of the side quests and grinding for loot, a tab in the menu opened up thousands of challenges and rewards to chase for completing tasks, such as killing enemies, finding secret collectibles, and using different weapons. As a completionist, my eyes lit up as I explored this menu as I could see myself playing Outriders for a long time if the rest of the game is a strong and promising as the opening few hours were.

These challenges will also reward you with customisation items, emotes, and even new parts for a mobile truck that is your mobile base of operations. Unfortunately, you don’t get to drive it and there is no vehicle combat.

Set to launch this Holiday, Outriders could be set up for success as it launches alongside a new generation of consoles. I did ask the Outriders’ Game Director, Bartosz Kmita, about how they are utilising the next-gen hardware; but unfortunately, they couldn’t talk about the PS5.

People Can Fly is now based in four locations around the world and employs more than 200 developers. If those studios and Square Enix can take advantage of the new hardware and capitalise on the excitement of a new generation of consoles and the power that comes with it, then Outriders could be something special this Holiday. However, a surefire hit isn’t a guarantee, as the biggest competition the game will have comes from Sony itself, with the PS5 exclusive title Godfall looking incredibly similar in structure and game design.

People Can Fly Return To Their Roots

People Can Fly are officially back, making the games they excel at. Outriders is embedded in the roots of their previous games, with flashes of Bulletstorm and Gears of War Judgement emanating throughout Outriders. However, the industry has changed a lot since 2013 and the studio appears to be taking what works in modern games and crafting a universe with its own dark identity.

As the preview event ended I came out impressed by what was shown. The foundation of Outriders is great and the core gameplay loop is engaging, fun, and combat is unique with its bloody action and impressive powers. All that’s left to do is maintain that identity and amp up the creativity throughout the experience. If the Polish studio is able to do that, then Outriders might end up being one of the best co-operative shooters in years and a potential must-have on PS5.

You can watch 45 minutes of gameplay from Outriders on our website.

Square Enix paid for the accommodation and travel to the Outriders Preview Event.