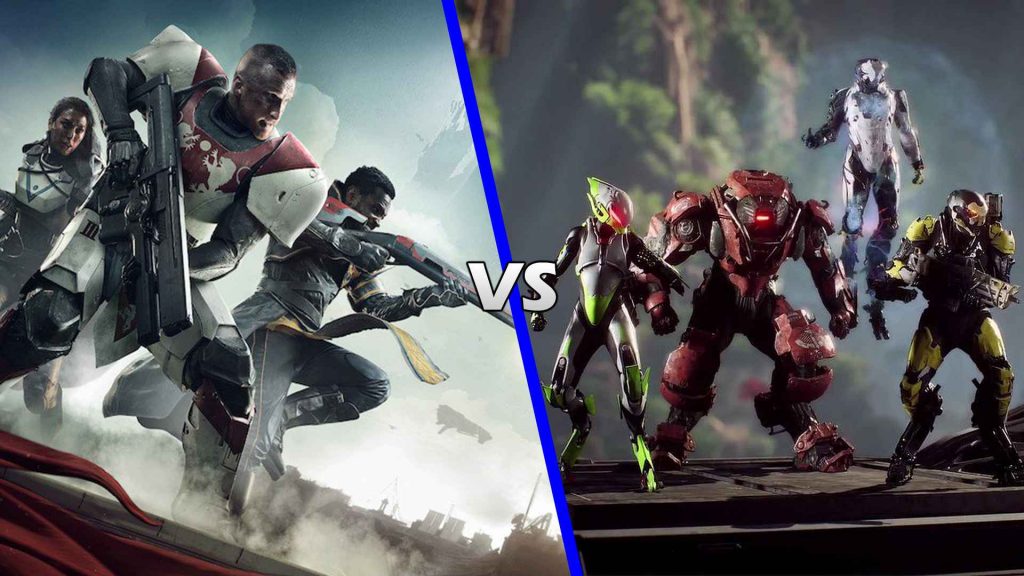 Back at E3 2017, EA announced a new game; Anthem. Anthem is an online multiplayer RPG that, at first glance, seems to duplicate what Destiny built.

The world was fully explorable through sky, land, and sea. Creatures roam around freely and the world appears to be alive. However outside of the announcement trailer, BioWare nor EA really gave too much information on the game.

Speculation grew and many in and out of the industry compared it to the only thing like it at the time, Destiny. A live game that is set in a sci-fi universe with gear and guns. I, as a Destiny fan, have to admit I was a bit nervous.

At the time Destiny 2 hadn’t been launched yet and I was still a little bitter at the fact that all of my progress from the original Destiny wasn’t going to carry over. I told myself to just wait and see where everything would land before I got ahead of myself.

Fast Forward to E3 2018. Anthem was on everyone’s minds during the EA press conference, while Destiny was preparing for Forsaken. A vast majority of the Destiny community was unhappy. If you were a casual Destiny player you felt forgotten, and if you were a lifelong player you felt ignored.

This resulted in huge interest in Anthem, and EA didn’t disappoint with new details. We not only received more information, but we were introduced to the first actual gameplay of the game.

We learned that BioWare was crafting a full story, complete with dialogue options and choices. However there was something that stood out to me, this wasn’t Destiny. This is obvious, but everyone compared it to Destiny so much that I was expecting a Destiny clone. Regardless of what I expected one thing was clear, this game is different and needs to be treated differently.

The main hub of the game was a single player experience, the world was live, and the missions where co-op. During the reveal, I remember thinking one thing ‘This is outer space Monster Hunter: World, not Destiny’.

Nevertheless, I witnessed more and more people refer to it as “A better Destiny” or “The new Destiny”. This made me not only upset that Destiny was being forgotten but also worried at what this comparison would do to each game. To me, it wasn’t fair to either game. Now here we are. Destiny 2: Forsaken is out and has made Destiny one of the best live games to be a part of. Bungie has a lot of work to still go, although with their recent split from Activision, seems to be making all the correct moves. A

nd Anthem. BioWare has just wrapped up both a private Beta and public demo in preparation for their launch on February 22nd. The chatter around the game made it seem like Destiny and Anthem where still being compared. So I jumped in to see first hand what this game was like.

I spent a full day with the Anthem public demo and flew around in an open world that was full of life and things to shoot. I received a bunch of loot, and I played game modes with random players in matchmaking. At the end of my experience with Anthem one thing was blatantly clear; Anthem is not Destiny.

At a glance, it’s forgivable to see similarities between the two. They are both shooters, set in a fantasy world, that allows you to go in missions with friends or solo.

However, this is where the comparison ends. It would be easy to list obvious differences such as Anthem is a third person shooter while Destiny is first person. Or how Anthem gives players more freedom to explore the world they built.

But the difference is deeper, at the core. From the moment you start the demo you are reminded that this is a single player game with multiplayer gameplay. What I mean by this is there is no public area where you see everyone running around talking to vendors or turning in quests. What you have is a marketplace that seems to be more at home inside a Skyrim than a Destiny.

The focus of the game is on the faceless player. You are the character that gets into their Javelins. These Javelins are your suits of armor, the source of your powers, and your vehicles. It is from this moment that I discovered I didn’t want Anthem. Now before I explain why I want to say this has nothing to do with how Anthem ran. Yes, I had a few problems with the demo. Although that’s not the final game and it is unfair of me to hold that against my opinion of Anthem. I am biased toward Destiny.

However, these feelings aren’t from a malicious place. Anthem deserves to exist. There is room inside gaming for Destiny, Warframe, The Division, Monster Hunter: World, and Anthem if not more. However, these comparisons are unfair to Anthem. Anthem is its own thing, and its not trying to copy Destiny. Yes, your primary focus in both games is loot, however, it’s not the soul of either game.

For Anthem, they are trying to blend Mass Effect, and Mass Effect: Online. The character building and completing missions with friends as you see other players running around the world. This is something BioWare can add to over the years giving new weapons, mods, and Javelins.

This is all positive as long as EA continues to support this game, but this won’t be what gets people attached to a game. I felt detached from the Javelin. This Iron-Man suit that everyone sees didn’t feel like a part of me, the player, but instead, it felt like a means to an end. This is where Destiny and Anthem differ, and in my opinion, where Anthem falls short. Now, granted this may be just because the demo was a demo. I didn’t feel an attachment, because it wasn’t mine. Nevertheless, in both the Alpha and Beta for the original Destiny I felt attached.

The gear I wear in Destiny is my character. It’s not a thing that sits until I’m ready to go out into the world, like a car. In Destiny, you become attached to your character. You take pride in if your Awoken, Human, or Exo, and even more pride in if your a Warlock, Hunter, or Titan. These choices are permanent, and because of that adds weight and pride to your choices. In Anthem, I can change Javelins every mission. There is no connection to these hunks of metal.

From running around the Tower in Destiny to running around Mars your Guardian is your own. If you acquire a new shader, weapon, or piece of gear you feel joy in flaunting it. This may sound vain, but it’s what keeps players coming back. When you start up Destiny and you internally choose your main class, regardless of if you are Titan, Warlock, or Hunter, you have the sense to be better than the other two classes. For example, my main class in Destiny is Hunter. When I see a Titan or Warlock I, through gameplay, try to outperform them. However, when I come across another Hunter my first thought is not ‘can I outperform them’ it is ‘do I have gear or weapons they don’t’.

These small but meaningful competitions are the reasons players take so much pride in their character even though they don’t have any control over the character nativity. This is the same premise as there is in national sports. If you are into a sport you have a team you root for. This is a sense of pride for the team and its players but also in many cases a sense of pride in the city. This pride is what I see Anthem lacking. Over the course of the past few years, I’ve learned that “collection-athons” as I call them are the only time of gameplay that I rever over the narrative. I normally will only play a game for the story and then drop it. Destiny has been different.

For the greater part of four years, I’ve immersed myself inside of Destiny. Yes, there have been weeks I didn’t play. Maybe out of fatigue or that another game just released. Although I always return. I used to think it was because I wanted to collect everything. Still to this day I don’t have all the exotics in the original Destiny.

However, that theory got destroyed when Destiny 2 launched and at the end of the second month, I was still playing even with having all exotics and gear sets. Then it hit me. I was coming back because of my Guardian. I wanted to make my character better and just run around with them. This, sadly, is something I don’t think I’ll get out of Anthem.

I want to be clear, I believe Anthem is and will be a good game. As long as EA allows BioWare to tweak and add content and expand on what they have built. This regrettably will be something up in the air until the game comes out. EA won’t support a game that doesn’t sell well. The new Titanfall and Apex Legends are evidence of that, but that’s another conversation for another time.

I am also aware that there is a large part of the Destiny community that just wants a fun game that allows them to acquire loot and play with friends. This is something that Anthem will be able to deliver and will be a hiccup in the Destiny community similar to how The Division and Monster Hunter: World were. However, there is also a large part that has an inherent tie to their Guardian.

So much so that players won’t ever leave or if they do will always come back. This is the lure of Destiny, and unfortunately, because all players can have all Javelins at the start of each mission this sense of attachment is lost. It’s the same attachment that Tony has to his Iron-Man suits and we all saw how he treated them at the end of Iron-Man 3. I wish Anthem nothing but luck, however, you will be able to find me in Destiny for the foreseeable future.