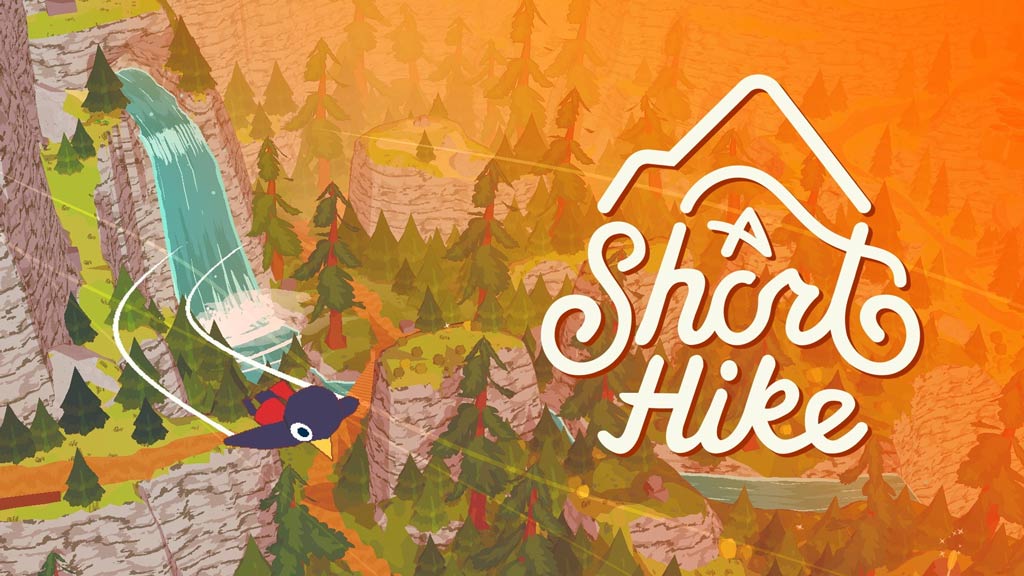 A Short Hike PS4 Review Whimsical indie adventures are getting to be quite the thing these days. Perhaps the imminent and premature demise of mankind from global warming is creating a demand for relaxing digital dips into idyllic natural environments, free from wildfires, floods, pollution and plagues of angry stoats, thirsty for retribution in the form of delicious human ears. Games which take only a few hours to complete are also handy when you may have to evacuate your property at short notice as it is swept asunder by a wall of nature’s justice. At least you can nab a quick platinum before the world ends…

This particular gem comes primarily from one man, Canadian developer Adam Robinson-Yu with a little help in the art and music departments from some of his very capable friends. While it’s a short hike (ha!) through to completion of the game compared to bigger titles, there’s still an enormous amount of content packed into this little game so kudos to Adam for crafting such a detailed and as it turns out, highly playable adventure.

You play as Claire, a cute canary who is visiting family for a holiday on a bright mountainous island, which it soon turns out has a central peak which is something of a challenge for most of the islanders. But ‘Hawk Peak Trail’ soon becomes a target for Claire as she is in need of phone reception to call her mother. As a result she’ll need to spend her time finding enough resources to complete the climb whilst she explores the island. The island is populated with friendly locals who you can converse with in witty text exchanges, often with an option to buy something or engage in a side quest at the end of the conversation. 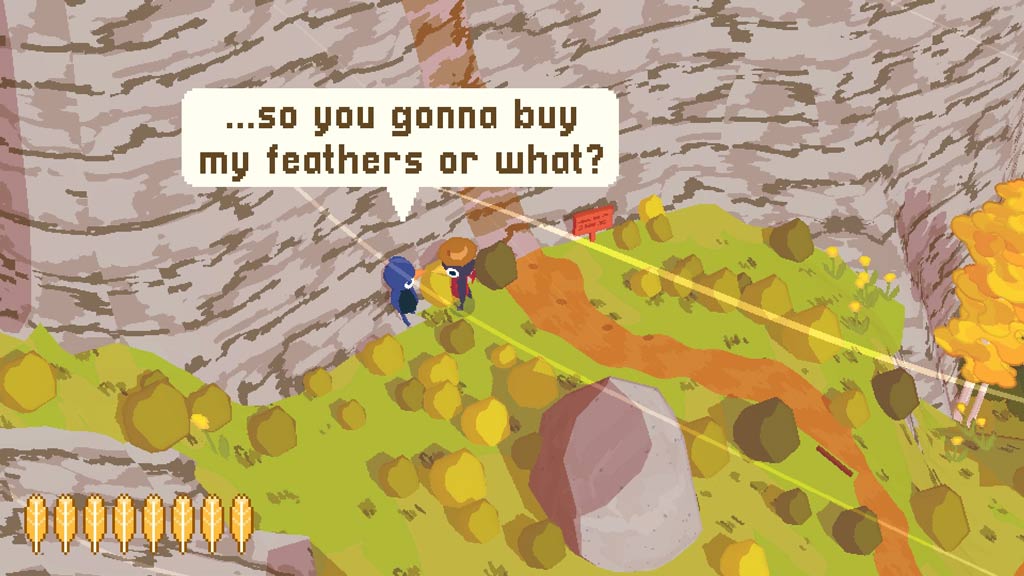 Quest For The Golden Feathers

These side quests include taking out a speed boat around the coast, playing a game of beach ball, finding a lost head-band and racing to the top of the highest peak against one of the fastest runners. These all offer up goodies such as cash used for buying useful extras, golden feathers which allow you to climb and jump further, shovels for digging, pick-axes to open up cave short cuts and a fishing rod. The island is also littered with items to collect so you won’t get far without seeing a sparkling gem or treasure chest which are compel you to get to them.

Initially Claire can walk and jump to traverse the undulating landscape paths, as well as gliding gracefully from higher levels to swoop onto areas which are otherwise difficult to reach. The camera turns automatically as you make your way behind a cliff or around the steep paths, and mostly this works, with just a few occasions where I was desperate to use the right stick to control the view. The controls are totally intuitive and add to the joyful experience of exploring which takes hold as soon as the game begins. 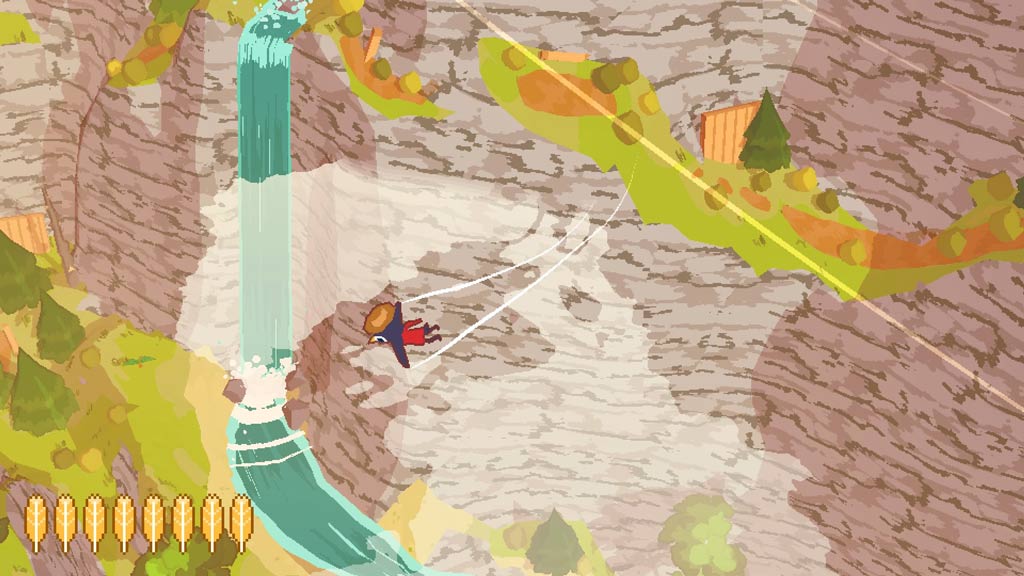 Bouncing Into The New Millennium

As well as the numerous signposted trails which lead you into the centre of the island, there is quite a stretch of coast to explore along with a smattering of islands accessible by a quick swim from one of the beaches. One of these islands reveals a sprouting seed which when watered with a nearby bucket blooms into a large flower which handily doubles as a floral trampoline. These turn out to be key helpers when you venture inland, as they bounce you to otherwise inaccessible ledges ripe with coins and treasure chests, essential for buying the golden feathers needed for the final push to the peak.

Once you begin the ascent to the peak, the weather soon turns frosty meaning that as you use up your golden feathers to climb cliffs, they fail to refill automatically as they do in the warmer lower climes. In order to continue upwards, Claire will need to look for the sparsely placed camp fires and hot pools in order to gain the climbing ability from her freshly filled feathers.

While the game strangely defaults to a thickly pixelated and totally retro look, a quick tweak of the graphics options enables much higher resolution which shows off the wonderful landscape and character designs. At the highest resolution, there is still a proudly nostalgic veneer, but the lighting and weather effects are beautifully evocative and help to contribute to the serene atmosphere of the island in the same way that indie peers Alba and Islanders have done recently. Similarly, the original soundtrack of chilled music is perfectly judged to complement the visuals and despite the frequent repetition, it manages to soothe rather than annoy. 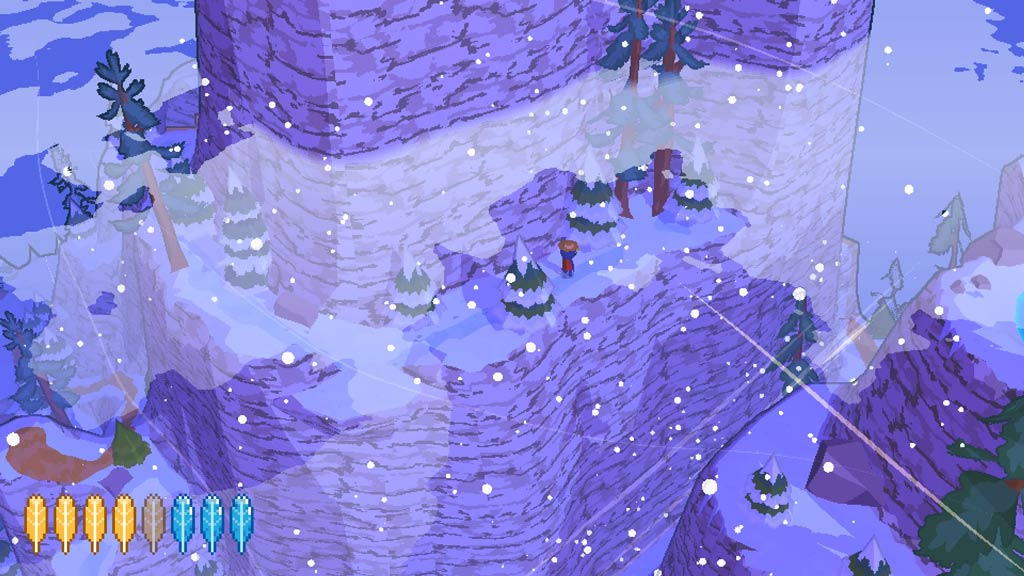 Like many of the aforementioned serene indie titles (of which Donut County and Untitled Goose Game are also included), an entire playthrough is brief at between two to three hours with a couple added in order to hoover up all the collectibles and to explore every square inch of the game. The fact that the experience is such a total joy means that even when you have exhausted all the possibilities and collected the trophies on offer, you’ll be back to play through again when you stumble across A Short Hike in your library a few months down the line.

These fleeting but heartening gaming experiences are as essential to modern gaming as any AAA big budget title and offer a totally different philosophy of what constitutes an enjoyable distraction from life and thus why we play games, watch movies and listen to music. So do your head and blood pressure a favour and indulge in A Short Hike (and the other highlighted titles) to reignite your inner child’s simple pleasures.

A Short Hike is available now on PS4 and PS5

As whimsical and relaxing lo-res indie adventure games go, A Short Hike is up there with the best. It draws you in with its freewheeling 'go where you like' vibe, charms you with some beautiful artwork and music and offers up great pleasures in exploration as you stroll, climb and glide around the small mountainous island. You'll only be there for a few hours, but every moment is a chilled out pleasure.