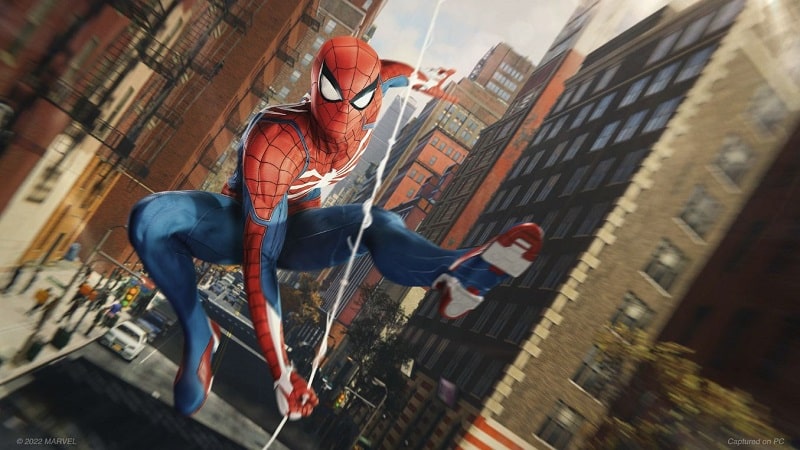 A caveat at the beginning though. While Marvel’s Spider-Man Remastered has a fairly reasonable set of minimum and recommended specifications, the fact remains that this is a very CPU heavy game to say the least. Unlike previous open-world PlayStation Studios offerings that have made the leap to PC such as Horizon Zero Dawn and Days Gone, Marvel’s Spider-Man Remastered is in a completely different league as it pertains to the technical complexities of both its open world and the manner in which you traverse it. 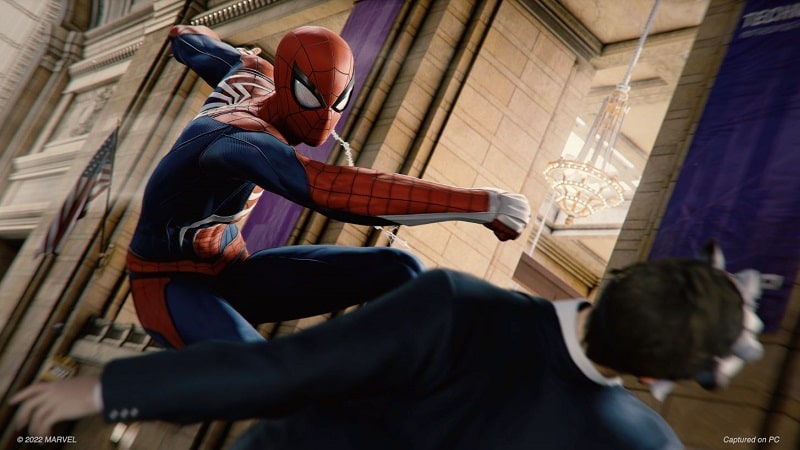 Whereas titles like Days Gone and Horizon Zero Dawn have you scooting about a fairly vast open-world at near enough ground level, Marvel’s Spider-Man Remastered has you quite literally swinging many hundreds of feet above a highly detailed recreation of the New York City skyline at speed before plummeting down to streets filled with pedestrians, cars and loads of other incidental detail in the span of just a few seconds. Naturally as you might expect this stresses the CPU mightily, so bear that in mind if the CPU on your rig isn’t quite up to par with other elements of its technical specification.

Once into the game proper, the reputation of Marvel’s Spider-Man as one of the games of the year for 2018 and one of the best superhero games ever made still remains utterly well-earned. Much like the recent entries in the Marvel Cinematic Universe, Marvel’s Spider-Man Remastered doesn’t attempt to regurgitate Spidey’s origin story but rather puts us in control of a more mature, more developed webslinger that has gained the admiration of the people and New York and has already tangled with many opposing supervillains a number of times to boot.

By allowing players to immediately access Spider-Man at something approaching the height of his powers at the beginning of the game, an event that is fantastically punctuated with a spectacle-stuffed encounter with the hulking gangster kingpin Wilson Fisk, Marvel’s Spider-Man Remastered feels immediately and viscerally gratifying in a way that many other superhero games simply do not. 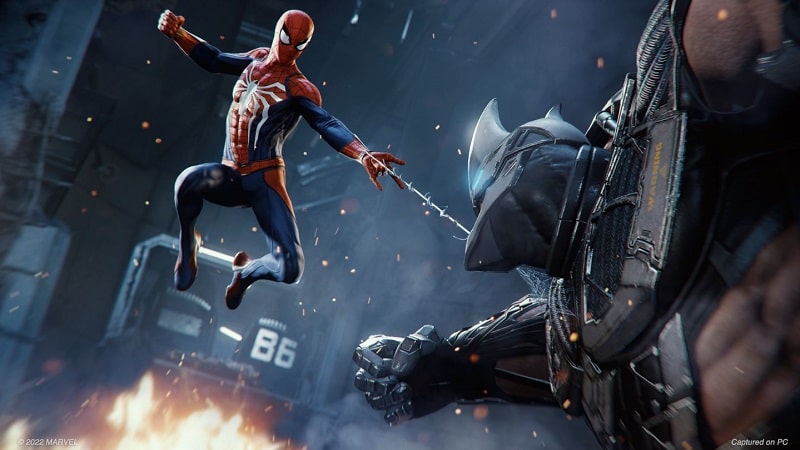 The very raw sense of empowerment that Marvel’s Spider-Man Remastered bestows upon the player is inextricably tied to its breath-taking traversal system that has arguably never been bettered. Making players feel every bit like the webslinger himself, Marvel’s Spider-Man Remastered allows players to not just soar, swing and spin through the skies and in-between the towering skyline of downtown Manhattan, but mix it up with a range of acrobatic dives, wall-runs and much, much more while providing you with freedom to change direction on a dime. Best of all, developer Insomniac Games has made such superhero acrobatics immediately accessible, permitting even the most timid gamer to perform a jaw-dropping range of gracefully balletic moves as they speedily swoop down and between the buildings of the Big Apple with very little effort.

Much like the traversal side of things, combat is extremely easy to get to grips with and provides hugely satisfying results very, very quickly. With an emphasis on evasion, chaining together melee combinations and using a variety of web attacks and gadgets from range, Marvel’s Spider-Man Remastered has players effortlessly air-juggling enemies, disarming them of their weapons, webbing them up against walls, executing stealth attacks and evading (thanks to a natty use of the Spider-sense that helpfully provides a visual cue when an attack is incoming). 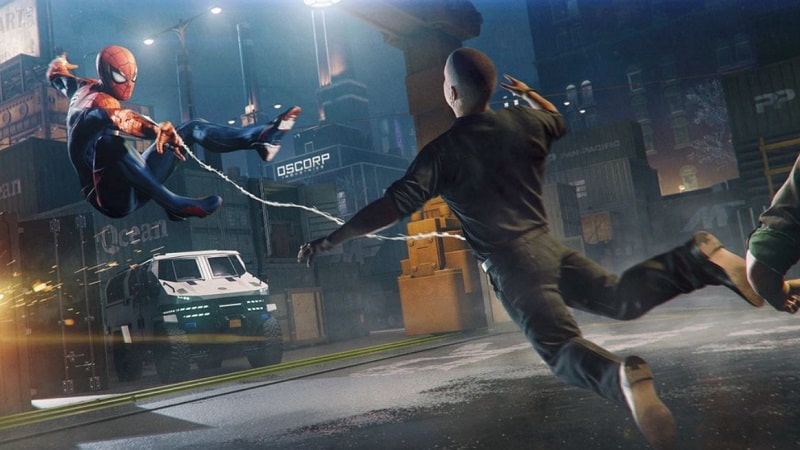 There’s also a feedback loop of sorts that exists between Spider-Man’s numerous gadgets and special abilities too. You see, each time you beatdown one of Spidey’s foes, not only does your gadgets recharge for for repeated use, but so too does your focus bar which allows you to not only unleash devastating, cinematic takedowns, but also heal chunks of Spidey’s health depending on how much focus you have accumulated. Quite simply, mashing goons upside the head as Spider-Man has never felt better and the combat system used here is both lightweight and satisfyingly sophisticated enough to keep you wanting more.

Beyond the traversal and combat mechanics that serve as the basis for Marvel’s Spider-Man Remastered, you’ll be spending a fair chunk of time tackling not just story missions, but a range of side missions and additional activities too. Though Marvel’s Spider-Man Remastered does follow some of the acknowledged and now fairly shop-worn tropes of the open-world genre with towers that when liberated reveal additional activities for you to pursue on your map and so on, developer Insomniac Games does at least try to make these activities fun to complete and somewhat meaningful to the overall narrative.

One such example of this approach are the collectibles that you’ll find yourself scooping up during your time with Marvel’s Spider-Man Remastered. Dotted all around New York City are webbed up backpacks put there by Spider-Man during his earlier years to act as a time-capsule of sorts which provide fond and oftentimes amusing memories about key events from his past. From the restaurant menu during his first date with MJ through to his first attempt at making web-shooters and even a touching drawing made by a youngster that Spidey saved in years gone by, the narration that Spider-Man voice actor Yuri Lowenthal provides is both warm and melancholic as he reflects on how much he has changed as a person since donning the spider-suit. 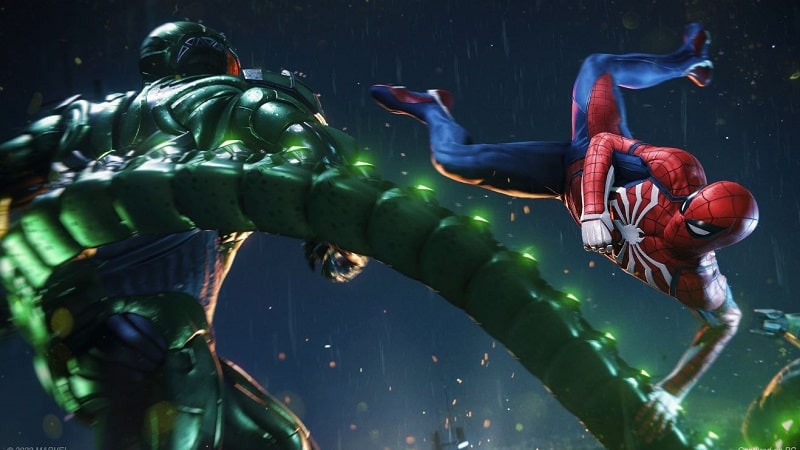 In addition to picking up these backpacks, Spider-Man also finds himself taking on special challenges which test his airborne acrobatics, combat challenges that do what they say on the tin, photography challenges where he must awake his inner Daily Bugle reporter and take photos of key landmarks and other such activities – all of which serve to pad out the experience a little further than would otherwise be the case.

Thankfully all of these extracurricular activities, which normally may have been a touch banal to finish on their own, offer a substantial incentive for completion as they provide special tokens that can be used to craft all-new suits for our favourite web-crawler that not only provide new abilities, but also brilliantly riff on some of Spider-Man’s most famous suits from both the movies and comics as well.

Further Reading – Everything We Know About Marvel’s Spider-Man 2

Marvel’s Spider-Man Remastered perfectly encapsulates the almost painfully affable, gee-shucks charm and goofy likeability of Peter Parker, neatly balancing it with his attempt to reconcile some sort of regular life with his responsibilities as a superhero and the darker side of the consequences that unavoidably result from his actions as the latter. 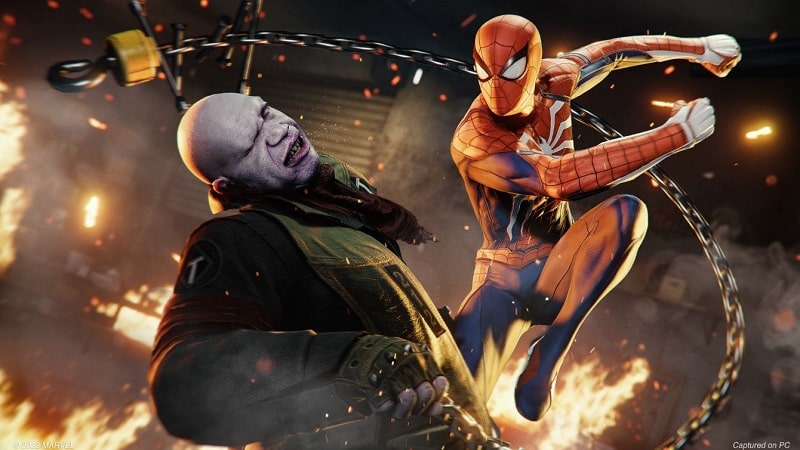 Elsewhere, it’s also clear that Marvel’s Spider-Man Remastered is one of the most handsomely produced open-world blockbusters to come along onto PC in a good while. Having your earholes generously caressed by the sweeping orchestral backing that evokes such loving similarities with Danny Elfman’s own grandiose, haunting score that reaches a dramatic swell as you dive off a building and begin to swing through the streets, Marvel’s Spider-Man Remastered feels every bit like the bombastic Hollywood spectacle you would expect to see on the big screen.

Affecting an extremely detailed presentation that could easily be mistaken for a full-fledged CG movie at times, thanks in no small part to the heady quality of the rendering combined with a wonderfully overstated streak of cinematic flair that echoes the spectacle of the live-action Spider-Man movies, visually speaking, Marvel’s Spider-Man Remastered is an absolute knockout. On PC, Marvel’s Spider-Man Remastered gets a further boost too, thanks to a range of ray-tracing, shadow and display resolution improvements that all serve to underscore this version as the most technically accomplished of any released so far.

Giving the iconic Manhattan skyline ample room to breathe at last, playing Marvel’s Spider-Man Remastered in the PC version’s currently exclusive cinematic ultra-wide mode feels like how Insomniac’s superhero epic should have been experienced all along. Not only does the Big Apple utterly fill the screen with retina-stroking dominance, but combat also stands to benefit from ultra wide mode by allowing you to spot incoming threats that would normally lurk in your periphery much earlier.

Certainly the detail and fidelity with which New York has been rendered in makes me feel wistful for my own real-life return to the Big Apple itself, as Marvel’s Spider-Man Remastered permits me to swing around and navigate my way through landmarks as Central Park, the Highline and other such instantly recognisable areas of the city that I would love to revisit some day. 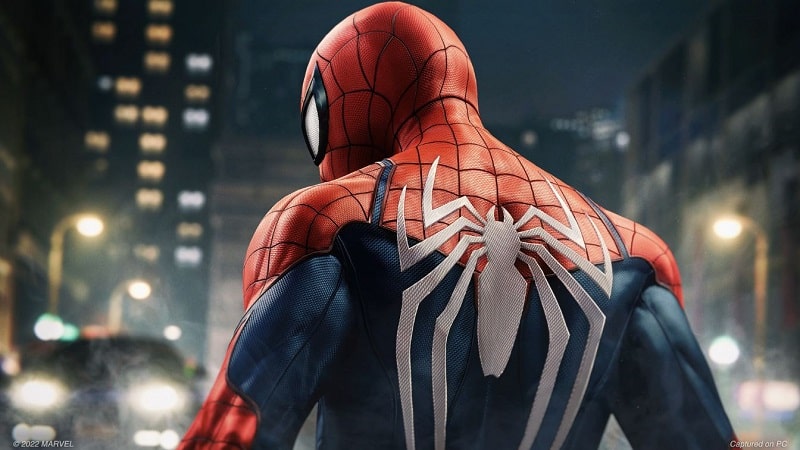 Purely as a value proposition too, Marvel’s Spider-Man Remastered provides an impressive bang for buck ratio where PC gamers are concerned. Not only is the base campaign surprisingly large with a compelling narrative that brings together a veritable murder’s row of Spidey villains, but you have all of the additional side missions and activities in there too, not to mention all of the post release campaign DLC that has been previously released for the game which provides the Webbed Wonder with some all new heroes and villains to tangle with from the depths of the comics.