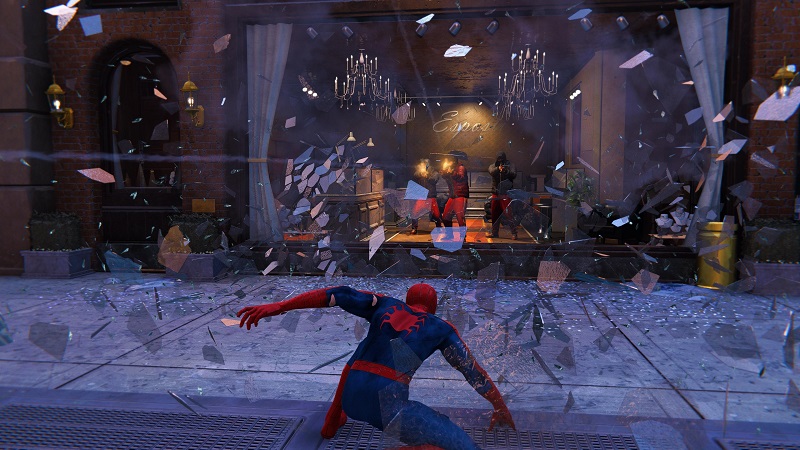 Your Friendly Neighbourhood Spider-Man Has Never Looked Or Played Better

For all intents and purposes this is the same game that most of us played back in 2018, so with that in mind our original review of Marvel’s Spider-Man on PS4 provides a much more in-depth critique of the game’s mechanics and more nuanced elements. Broadly speaking though, this means that same ground-breaking city traversal, acrobatic combat and superb story are all in place, present and correct. This my friends, is good news.

Pointedly, it’s especially good news if you’re new to the PlayStation platform and have never sampled the delights of Marvel’s Spider-Man previously. Again, without re-treading the content of that aforementioned original review, Marvel’s Spider-Man is a tremendous, third-person action title that really makes you feel like Webbed Wonder as he soars and swoops through the New York skyline, beating up baddies and generally saving the day like a good lad.

Related Content – All PS4 Games That Have PS5 Upgrades – Guide

In this newly remastered version of Marvel’s Spider-Man, you’re getting all that and more as this version of the game comes jam-packed with all of the DLC and story expansion content which was released for the original game.

It’s also worth remembering too that while Marvel’s Spider-Man was (and very much still is) a fantastic action adventure, it does have a small handful of flaws that detract a little from the overall package. From the Mary Jane focused insta-fail stealth missions, to the fairly dull power re-routing puzzle mini-games and a general oversaturation of open world tasks to do, it’s certainly fair to say that in this regard at least, Insomniac’s seminal superhero outing hasn’t quite aged as well as aspects of the game.

Ironically in this sense, Spider-Man: Miles Morales comes out looking as the better game, boasting not only a superior narrative and improved combat but a leaner game structure resulting far less open world busywork and, of course, none of those horrendous insta-fail stealth missions from the 2018 title. Regardless though, Marvel’s Spider-Man is still a cracking game and in its remastered form, it has never looked or played better.

Mirroring the visual feature set glimpsed in Spider-Man: Miles Morales, Spider-Man: Remastered lets players switch between a fidelity and performance mode which each affect the visuals and gameplay in all the ways that you might imagine.

Fidelity is the default visual mode here. Providing a razor sharp 4K base resolution enhanced by Temporal Injection, the fidelity visual preset also brings with it enhanced lighting and stunning ray tracing effects, albeit at a cost of running at a locked 30 frames per second (the same framerate that Marvel’s Spider-Man was able to hit on PS4 and PS4 Pro back in 2018).

When being played in this mode, Marvel’s Spider-Man: Remastered looks simply incredible and easily passes for a true next-generation PlayStation 5 offering in the process. Like Spider-Man: Miles Morales however, it’s the performance mode that is truly transformative.

By stripping away the fancy ray tracing, enhanced visual effects and dropping the resolution down to upscaled 4K, Spider-Man: Remastered’s performance mode allows the game to absolutely scream along at a locked 60 frames per second. As a result, everything from swinging around the city to socking goons in the face not only looks beautifully smooth, but feels much more responsive too. Look, once you’ve tried the performance mode in Spider-Man: Remastered it’s unlikely you’ll ever switch back to the default fidelity mode – so substantial are the gameplay benefits that the former brings over the latter.

Here’s the thing though, despite the apparently sizable drops in visual quality, Spider-Man: Remastered still looks hugely impressive with performance mode switched on – even when observed where no movement is taking place.

Further afield, Spider-Man: Remastered also benefits from the same lightning quick load times that Miles Morales does too, allowing players to fast travel in just a couple of seconds and load up a saved game from cold boot in just over ten seconds. It’s a remarkable achievement in technology that I still haven’t gotten quite used to yet.

A little less remarkable though is the DualSense implementation, in which both the haptic feedback and adaptive triggers feel a little like afterthoughts here; providing a nice bit of rumble and tension when the action happens, but otherwise little more than that.

In the end then, Marvel’s Spider-Man Remastered is a great remastering of an already superb superhero title. Acting as a neat bridge to the events seen in Spider-Man: Miles Morales, Marvel’s Spider-Man: Remastered might not be essential to those webbed veterans who have already seen everything that the 2018 title has to offer, but it most certainly is required gaming for anyone not previously acquainted with the shenanigans of this particular neighbourhood Spider-Man.

Marvel’s Spider-Man: Remastered is out for PlayStation 5 on November 12, 2020.

Marvel's Spider-Man: Remastered swings onto PlayStation 5 and brings with it a sterling remastering of one of 2018's best games. Though perhaps not quite essential for rabid players who have explored every nook and cranny of Insomniac's impeccably realised Marvel New York, Marvel's Spider-Man: Remastered is must-have gaming for everyone who has yet to sample the heroic adventures of the original friendly, neighbourhood Spider-Man.