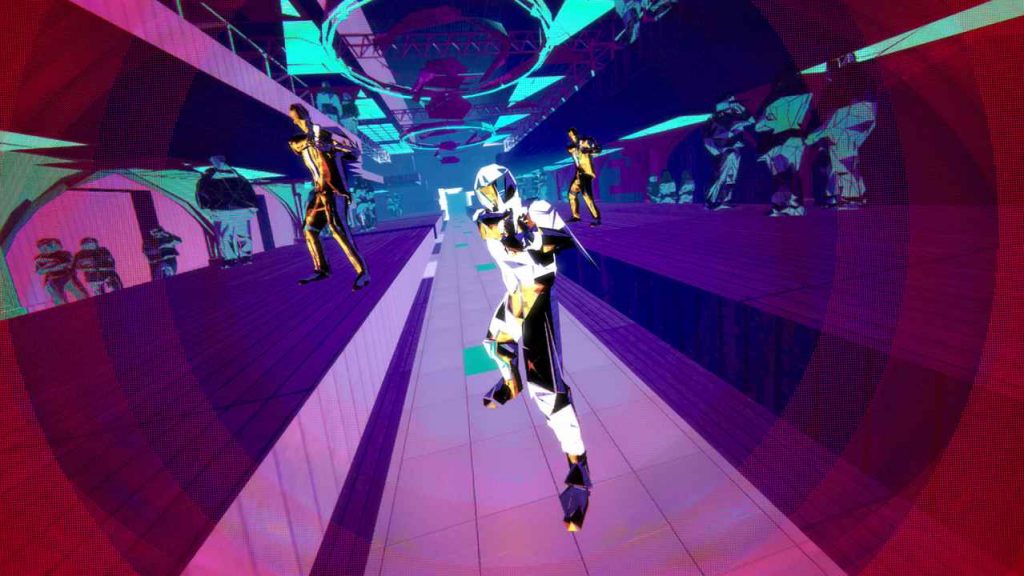 Pistol Whip PSVR Review – I’m sitting on my bed typing early on Sunday morning while my wife is making breakfast for the kids. Having spent the majority of Saturday playing through Pistol Whip on a variety of settings, my body is sore, but my mind is tranquil. Considering everything I’ve experienced in Pistol Whip the past couple of days, I am struggling to come up with a reason not to give this game a “10”. And you know what? I can’t come up with a god-damned thing.

With most PSVR games, there is something that holds me back. Graphical flaws. Controls that seem a little off. Maybe the Move Controllers slide out of place, or I experience a little bit of disorientation or nausea. Even the very best VR games tend to glitch out a little bit. The technology is still fairly new, and no one has been able to truly nail down technical functionality 100%. No one, that is, until the team at Cloudhead Games released Pistol Whip.

Pistol Whip is clean the way a new technology is clean when you peel off that plastic film. Slick, smooth, and delightful to touch, you just want to rub it on your face. There is a purity to Pistol Whip that must be experienced to be fully appreciated. Forget putting people in that shark cage. Pistol Whip is the game that should be used to introduce new players to the possibilities of VR.

By nailing down a simple game loop, and then expounding upon it and polishing Pistol Whip to a crystalline shine, the team at Cloudhead Games has created something akin to a cyber-masterpiece. There is nothing unnecessary in Pistol Whip. All vestigial limbs of unneeded gameplay have been sliced away with a scalpel, leaving the player with an experience that makes them feel like the baddest-ass in all of badassdom.

Graphics in Pistol Whip are only as complex as they need to be. The devs leaned in on aspects of game design that make VR troublesome, and flipped them on their ear. Having trouble getting textures to render well? Strip them all out and leave a geometric-neon-polygon-circus for players to enjoy. VR not able to create graphics without tearing at the seams? Embrace it, and disassemble your environments on the fly as players float through them. Controls too difficult to map? Get rid of them.

Every traditional weakness in VR games has been converted to a strength in Pistol Whip, leaving behind an offering that exists at the very apex of the PSVR platform. PSVR on the PS4 couldn’t have asked for a better title to serve as the grand finale.

Can You Pick Up A Move Controller? You Can Play Pistol Whip

The concept in Pistol Whip is so streamlined that players can be taught how to play in a tutorial that lasts less than a minute. In an era of VR gaming that has players struggling to remember which button turns them and which teleports them forward, the entirety of Pistol Whip can be played with exactly one button. Hell, you really only need one button on one controller, unless you want to get all fancy and dual-wield.

Instead of relying on a complicated control scheme, Cloudhead Games wisely focuses on what makes VR fun – color, sound, and movement. The player is constantly in motion, shifting their weight for a view, ducking for cover behind pillars – and of course, popping off shots left and right. Calling Pistol Whip a “one button game” would be reductive. The game simply shifts the works usually done by a controller onto your body.

Level Design Is Supurb and Surprising

A typical level in Pistol Whip (or “scene”, as the game likes to call them) has players being propelled at a steady clip down a corridor. Maybe it’s a city street. Maybe it’s a hallway. Maybe it’s a Tron-like cyberscape of random bits and platforms. As soon as the player appears, an EDM track starts thumping in the background. Whether you like EDM or not is irrelevant. You will like it here. You will become a convert. If you are anything like me, you will leave your sound system on, and wear your headphones. You need to hear the music, but you also need to feel it.

As the player slides down the corridor, bad guys start appearing from the sides. They can be above you or below you. They can be tucked into rooms off to the side. They could be standing on archways far above you. Or they could be charging right towards you.

When the bad guys reach a certain point, they turn and fire at you. It is up to you to dodge their bullets, and shoot them back. If they are within reach, you have the ability to punch them. Along the way, there will be some obstacles to dodge and duck under. You can take a few shots before dying, and killing a few guys will refresh your shield. Shoot them on beat, and you get extra points (but its okay to just blast away like a fool if you are in a tight spot).

That’s it, really. Some fun modifiers allow you to change up the dynamics of the game (dual-wield, infinite ammo, stuff like that). And you can modify the look and performance of your gun. The truly confident (or psychotic) can turn off aim assist. But mostly, time in Pistol Whip is spent just sliding down a corridor, shooting dudes. But they way those dudes are arranged is the genius in this game. Be ready for surprises. Pistol Whip often made me cry out involuntarily, simply by delighting me with its choices.

Every scene is based on a fictional film, and the way that the themes unfold as the player glides forward is amazing. My favorite level is one called “Death”, which has the player bobbing through a CPU’s interpretation of a Dia de los Muertos celebration. Stunning, hilarious, and utterly engaging. I beat this level, and reupped immediately, just to experience it again. The level – like the music – has movements, and is possibly the most compressed fun I’ve had in five minutes this side of roller coasters.

Scenes have leaderboards, and can be played on three different difficulty settings – all of which are fun. There is no shame in starting a level on easy difficulty for a few rounds to learn it a bit before plunging yourself into higher difficulties. Like dancing, Pistol Whip is a game where practice makes perfect.

Also like dancing, Pistol Whip is a workout. Come prepared with some towels, and be ready to clean the lenses on your PSVR every five levels or so. But the calories you leave in the game are the price of admission. No action hero ever made it through a gauntlet of bad guys while munching on Pringles. I am an old man with bad knees, but I ran and got my knee braces and popped a couple of Advil rather than stop playing. Consider the exercise a bonus, a side effect of fun.

The Sum Is Greater Than The Pieces

So what makes Pistol Whip so special? It’s the way that the pieces all lock together. It’s the absolute artistry involved in matching the music to the action. The way that the bad guys appear in such a way that you naturally blast them in time to the music, and just as everything reaches a crescendo, the beat drops, and something crazy happens.

Pistol Whip’s unending ability to surprise and delight the player leaves you exhausted and triumphant at the end of a level, thrusting your fists in the air as though it was you, and not the game, that was so insanely cool. Standing in a vibrating room, bouncing to the beat and popping off shots in a way that adds a line of percussion to the masterful music? Beyond satisfying, bordering on mystical.

When Pistol Whip sets something up, and you instinctively knock it down correctly on the first try, you can feel yourself connecting with the game designers through the music in a way that is almost psychic. “Oh, they want me to do it like this, and I am happy to oblige them, because it will make me the coolest person in the world.” In Pistol Whip, you don’t feel like the game’s developers are working against you. Rather, they are enabling you, feeding you, giving you the fuel you always needed to be a John Wick-assassin-superhero.

Cloudhead Games are tapping into parts of the universal human experience with Pistol Whip; the ability to really feel music in your bones, the communal response to rhythm that lives in our DNA, and the need to be truly awesome once in a while. It is possible with Pistol Whip to enter a bliss-like state, turning your mind off and just being part of the game. Tetris fans know this state. As do Guitar Hero fans. Robotron players as well. With Pistol Whip, you can enter an arena of sweat and instinct that makes you into an action hero in the coolest movie ever. Every PSVR owner should buy this game immediately.

Pistol Whip is now available on the PlayStation Store.

Pistol Whip is a triumph of game design. Rather than trying to wedge a bunch of mechanics onto a platform that doesn’t welcome them, Pistol Whip instead focuses on what makes VR fun – color, sound, and motion. This is a game that connects players with the developers’ intentions through its simple interface, leaving the player sweaty, inspired, and triumphant. Masterpieces come in all forms – and Pistol Whip qualifies.