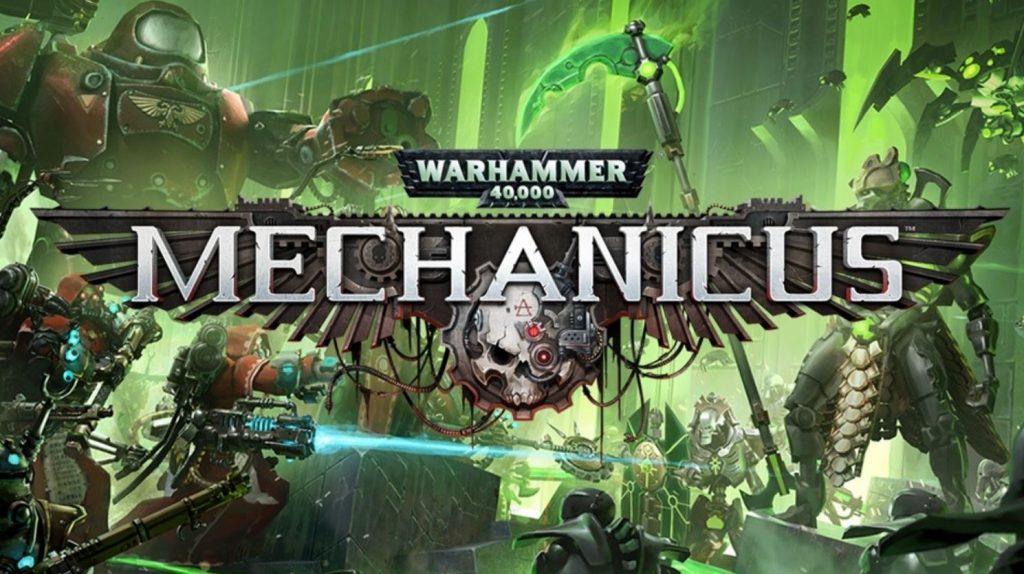 The overall story of Mechanicus is fairly concise and straightforward, stuffed with references and lore that die-hard 40K fans will love but might prove daunting to newcomers to the franchise.

The protagonists of Mechanicus are members of the Adeptus Mechanicus, aka the Tech-Priests of Mars. Unlike their portrayal in other Warhammer 40,000 games these Tech-Priests are not soldiers first, but scholars. Indeed, the conceit of the game is that the Tech-Priests in charge of this mission do not want to risk themselves and are therefore directing units from orbit with events being projected onto a holographic board.

Lesser Tech-Priests are sent down to the surface, but they function more as commanders rather than mere soldiers. That role is taken by the different forms of troop units that you acquire throughout the game. Ranging from simple cannon fodder to more elite units, these troops will form the backbone of your squads in Mechanicus.

Strategy and planning are the core aspects of Mechanicus. From the set-up of skill trees to the deployment of your troops, to every aspect of combat in the game. Strategy and planning are your best tools – which of course is what you want from a strategy game. Mechanicus works fine as a console game but the controls are unintuitive and clunky and show clearly how the title was designed with PCs in mind. Nonetheless, Mechanicus does feel better than other console strategy games in some respects due to the simplicity of the combat system itself.

In this round-based combat system, you only have to worry about moving one unit at a time, with no time limit for planning and making those moves. Furthermore, the way the system blends movement into combat allows for more flexibility than you might expect from grid-based combat. The ability for characters to gain “Cognition Points,” which can act as extra movement points, mid-round allows you to chain a series of attacks and movement that is fairly impressive.

One of the downsides is that ranged attacks are in meters and there is no reference for how that translates into spaces on the board. Overall, it is a solid system, but as I stated earlier, it’s much better suited for a mouse and keyboard than a controller.

The enemies of Mechanicus are one of the oldest races in the lore of the universe, The Necrons. Ancient robotic skeletal warriors that waged a war against their gods and won before entering stasis for the past 60 million years, the Necrons are one of the most fearsome of the intergalactic races in 40K.

The game takes place on a long-forgotten world that is, in fact, a Tomb World, a stronghold of the Necrons. Over the course of the game as your units explore the Tomb you begin to awaken these ancient warriors from their slumber.

The Necrons are individually more powerful than your units and as you progress through the game stronger Necrons are unleashed. While on missions performing actions will also increase the alert level inside the tomb which will give bonuses to any Necrons lurking about. You must be quick and decisive so that you accomplish your objectives without enemies becoming too much hassle to overcome. This system greatly emphasizes the need for tactical and strategic planning found throughout Mechanicus.

There are always changes that are made when a game moves platforms. UI tweaks, software updates, and more are among the laundry list of things that are addressed, and it’s obvious that the developers took care when they ported this game to consoles from PC. However, there are just certain types of games and strategy games in particular that just do not feel the same on console versus PC.

The amount of fine control that a mouse and keyboard give simply cannot be replicated on a controller. The severely reduced amount of possible inputs also features heavily in how a game feels clunkier on consoles.

The team at Bulwark Studios did an excellent job of trying to make those changes feel as least impactful as possible, though the fact that the game only has audio settings with no way to change the aspect ratio or graphical settings means that, depending on your TV, the edges won’t fit quite right.

It’s not for lack of trying either, as even games like Civilization VI, which our review determined to be one of most accomplished strategy games on console, still suffered from issues that are not present in its original PC form. The lack of that inherent precision that is found with using a mouse and keyboard, while not as immediately obvious as an FPS, can lead to somewhat of a general frustration building over time.

Hopefully, this is something that will be improved upon in the upcoming console generation, especially with the improvements the PS5 DualSense controller will have. Even so, I highly doubt that any console strategy game will feel as good as its PC counterpart.

Warhammer 40,000 Mechanicus is a faithful attempt to bring the strategy and tactics of tabletop Warhammer 40,000 into the virtual space. The experience is steeped in lore that fans will no doubt lap up, and will hopefully introduce new fans to this still-expanding universe. The focus on strategy serves it well for the most part and those that can grasp the nuances of the combat system will find it an intriguing and interesting challenge.

The story is well written, and the characters are fleshed out with their own personalities and quirks that make them unique. I would recommend that fans of the Warhammer 40,000 universe give Mechanicus a shot, especially if you are looking for something outside the Space Marine series.

For those who enjoy strategy games, the interesting puzzles and challenges this game provides will be welcomed with open arms. Mastering the combat system and crafting the perfect build for your Tech Priests will encourage replayability, although the differences between the PS4 port and the original PC version stand out significantly.