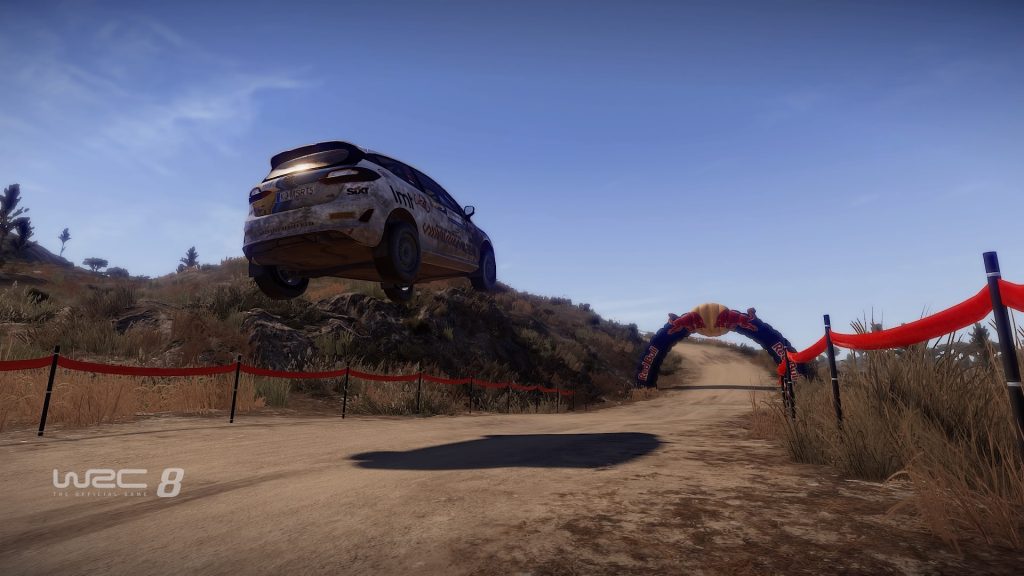 Driving a rally car is a lot like being married. After the initial euphoria of the honeymoon period as you zoom together into the unexpected with your partner, you eventually become complacent and zone out, ignoring the endless wittering as you enjoy the scenery and think about what to have for dinner. This leaves only yourself to blame when you have a mid-track crisis and sleep with the neighbour’s Subaru Impreza. Oh hang on, that analogy went somewhat awry…

There are currently seven dedicated rally games available for the PS4, with the current high watermark being set by Codemasters‘ Dirt Rally 2. Gravel, Dakar 18, V-Rally 4, Sebastien Loeb Rally, Dirt and the WRC franchise are all aspiring for the crown and even GT Sport and Project Cars 2 feature rally cars, emphasising the wide appeal of the sport to videogame petrolheads.

WRC 8 is the third iteration of the game for PS4, and builds on already solid ground by adding improved lighting effects and a more substantial career mode. Being the only game with an official World Rally Championship licence means a full driver line-up across 50 teams, and every single stage on the 14 rally calendar, meticulously recreated in astonishing detail. But does this make for an enjoyable driving experience?

The WRC career enables you to sign a contract with a team and manufacturer and simulates every facet of a rally team through a central hub, with a top down Sims-style interface. You can choose how to fill your spare days leading up to the next rally event through the calendar, be it an extreme weather challenge, a training day or a manufacturer tryout where success is measured via distance traveled in a certain time.

Your team can be recruited to help with the upcoming events, with engineers, mechanics, meteorologists, finance directors and many more, all making the event run smoothly and minimizing costs. After a few races, the management aspect starts to click and becomes an enjoyable distraction between the intense rally driving. Like Codemasters‘ F1 series, after successful races you can allot points towards a tree of development choosing from two branches initially with two more opening up during the season.

All of the above would be a shocking waste of time, if the racing itself was below par.

Well it’s certainly not, in fact this could be a contender for Dirt Rally 2’s brown crown. You see, unlike nearly all rally games, WRC 8 features digitized versions of real life tracks so there is real variety and authenticity to the driving experience. As you speed through the environments, desperately trying to stay out of the ditch, there is a real sense of place and therefore the stages avoid the generic feel which is synonymous with rally games.

An improved lighting system and the dynamic weather effects enhance the immersion, and at speed, with the bonnet camera, you could be hard pushed to think you’re not sat on the sofa in your pants, but you’re actually in Sardinia careering through the glorious scenery on crumbling roads.

The cars themselves handle well, with a fairly easy learning curve for anyone who has played a more simulation-centric rally game before. You may well spend the first half of the season struggling to get to grips with the cars, and playing on any setting but easy will likely see you hoofed out of the team before midway through the racing year.

It’s highly satisfying once you’ve nailed it though and you’ll be keen to repeat many of the 100+ stages in order to climb the timing charts online. Like Dirt Rally, there are weekly online challenges to get stuck into plus eSports competitions and four tiers of car classes to enjoy, including a sprinkling of classic cars this time around.

If this all sounds like smiles and sunshine, think again. There are a few flies in the muddy ointment (facepack) but fortunately they aren’t dealbreakers.

Firstly the car models are less than impressive. They’re the right shape certainly, but one gets the sense that with the amount of detail the Kylotonn team put into the tracks, they ran out of time to spruce up the vehicles. In fact they look like they’ve been dropped in from a cheap PS3 game, with the flat textures seemingly unable to reflect the glorious light that abounds on the tracks. Aside from the replays, you can sidestep the ignominy of the car models by selecting the bonnet cam, which also gives a greatly enhanced sense of pace.

The damage modelling also leaves a lot to be desired; considering the pummeling you can dish out to your vehicle, there’s very little evidence as you see the car cross the finish line at the end of the stage. Finally, only four classic rally cars are available from the off which seems a bit stingy – you’ll need to shell out for subsequent cars as they are released which is standard nowadays, but the initial roster could have been far less frugal.

Despite the minor grievances mentioned above, WRC 8 has elevated itself to the top of the rally tree through a combination of an enjoyable and deep career mode, a well realized driving experience which rewards patience, and a wealth of hand crafted and often breathtaking rally stages.

No doubt the development team will evolve the series next time around and hopefully iron out the few issues which have prevented the game trouncing the competition.

WRC 8 was developed by Kylotonn and published by Big Ben Interactive and is available for PS4, Xbox One and PC from Sept 5th 2019.

A combination of a laudable driving experience and exquisitely modelled official rally environments across 14 countries means WRC 8 delivers the goods and deserves your attention.