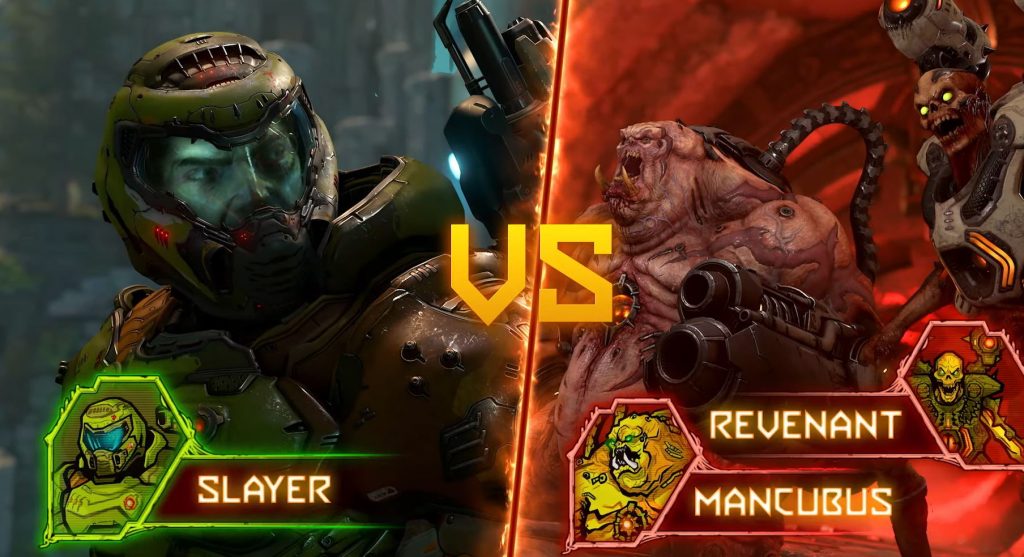 QuakeCon 2019 focused on the new Multiplayer component of DOOM Eternal, titled BattleMode. We got a look at how it works and some new gameplay for it.

BattleMode places one Doomslayer against two demons. The game will have six maps at launch, with five different playable demons. Matches play out like a game of cat and mouse with the demons hunting down the Slayer and the Slayer flanking and finding ways to break the two demons apart from one another. As each match progresses, new bonuses and abilities are gained upon round wins. More demons and maps will be released for free after the game releases.

The Revenant Demon allows you to move quickly and launch a barrage of rockets at the Slayer. The Pain Elemental has a rechargeable shield that is good at protecting it, but he is weak when flying. The Mancubus Demon has flamethrowers, heavy cannons and a lot of health making him a lethal close range option. He moves quite slowly. The Arch-vile and Marauder demons will also be playable.

Demons can also spawn a selection of AI-controlled Demons that play just like they do in the campaign. Hazards can also be dropped on the Doomslayer, such as hazard traps.

If you choose to play as the Demonslayer, you will be fully outfitted with all the guns, mods, and equipment from the single-player campaign. You will also have to manage your resources. Glory killing Demons will provide you with health, chainsaw kills will grant ammo, and burning enemies will drop armor. But, Demons have a slowly charging ability that can block those resources, stopping them from being dropped upon a successful kill.

BattleMode was briefly mentioned at E3 2019, alongside the release date of DOOM Eternal. DOOM Eternal is the direct sequel to 2016’s excellent and confusingly named DOOM. The game was originally announced at E3 2018, with the gameplay reveal coming at QuakeCon last year.

The game has a packed Collector’s Edition for those who want a bunch of goodies related to the game. Two story-based DLC expansions will be released for the game after launch. DOOM Eternal could come to next-generation consoles, as id Software have confirmed that their tech is scalable to new hardware.

With a redesigned set of armor, and an arsenal of new equipment, your fight against the onslaught of Hell continues. Take on twice as many demons in DOOM Eternal, including fan favourites from classic DOOM titles like the Archvile, Pain Elemental, and the Arachnotron.

What are your thoughts on BattleMode? Are you excited to give it a try or will you be sticking to the campaign? Will you choose to be a Demon or a Slayer?