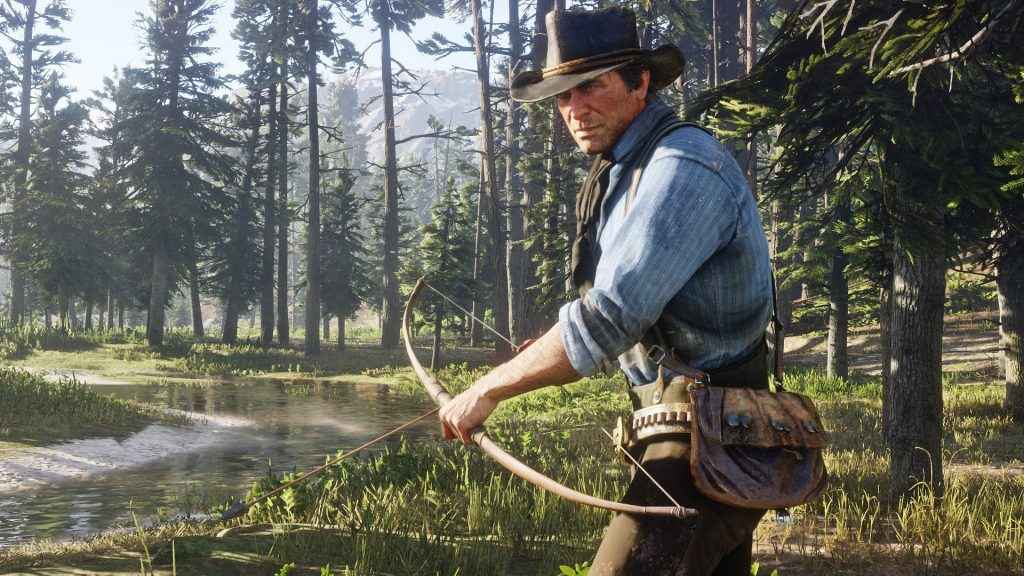 As you explore the wild west in Red Dead Redemption 2 in search of opportunities to make money and generally help the Van der Linde gang thrive in an ever-changing world, protagonist Arthur Morgan can hunt a variety of wild animals. These Legendary animals can be tricky to hunt down!

The pelts he obtains from these sojourns can then be used to craft equipment that may prove invaluable during his adventures or sold for a decent profit – depending on the quality of the skin.

Red Dead Redemption 2 is a video game, of course. So, alongside the standard breeds of wolf, bear, and bison, are elusive, legendary versions of these same species. Which, when skinned, yield the rarest resources.

But successfully hunting these magnificent creatures (delineated on the map by the crown that sits atop the corresponding icon) isn’t just about obtaining high-end items.

Virtual trophy collectors and completionists alike will have visit all fifteen Red Dead Redemption 2 legendary animal locations and hunt the animals therein if they’re to earn the “Skin Deep” and “Zoologist” trophies. And, ultimately, the Platinum.

This is easier said than done, however. Even with Hosea Matthews’ map, given to Arthur in Chapter 2, in your possession.

Fear not! In this guide, we provide detailed written instructions for locating each and every legendary animal Red Dead Redemption 2 has to offer.

How To Track Legendary Animals In RDR 2

Before we begin listing the location of all 15 beasts, there’s one important detail that mustn’t be overlooked.

Legendary animals will only spawn if, upon entering their territory, the following prompt appears on your HUD: “You have entered Legendary Animal Territory. Hunt this Legendary Animal by finding and inspecting clues”.

If this prompt doesn’t appear for whatever reason, ride to another location and take a quick nap. Now return to the animal’s territory and, assuming the prompt appears as intended, begin the hunt. If not, if not, simply repeat this process until it does.

From hereon in, successfully hunting your quarry is all about patience; using Arthur’s tracking skills to locate a trio of clues and, eventually, the animal’s distinctive trail.

Now all you need is the location of the animals themselves…

One of the most dangerous creatures in the game – it might even be a match for Far Cry 4’s terrifying Honey Badger – the Legendary Alligator can be found on the south-west edge of the Lagras Bayou.

In fact, you’ll find it directly above the “U” in “Bayou” on Arthur’s map (we’ll be using map annotations to help orient you throughout this article, by the way).

Being a beaver, you won’t be surprised to learn that its legendary cousin is found on the banks of a river. The Kamassa River, to be precise.

To find it, head due south of Elysian Pool and look for the jut of land on the east bank, just before you reach the railway.

The Legendary Beaver’s not quite as dangerous a quarry as some of its brethren. But it’s pretty small, so bear in mind that it can be hard to hit without the assistance of Arthur’s Dead Eye skill.

The Legendary Bharati Grizzly lives in a region due north-west of O’Creagh’s Run and just south of the railway.

Although the easiest way to locate it is to search just north of the “Grizzlies East” annotation on your map; between the second “I” and “E” of the word “Grizzlies”.

It shouldn’t be too difficult to spot; just watch out for its razor-sharp claws and overwhelming strength when you do.

Tucked away between a road to the north and a stretch of railway to the south, about equidistant from Cattail Pond in the west and the Dakota River in the east, is the territory of the Legendary Big Horn Ram.

It’s not a particularly large or dangerous creature. But its horns can be a bit of a problem if you get too close.

Much like the Grizzly, the easiest way to describe the location of the Legendary Boar (without the aid of screenshots) is via the annotations on the map.

Locate the Bluewater Marsh and, a tad north of the “A” and “T” of “Bluewater”, you’ll find your quarry. You should find it east of a bend in the Kamassa River.

Head over to Big Valley (a few in-game miles west of Mount Shann).

A smidgen to the south and west of the centre point of this region is where you’ll find the Legendary Buck frolicking amidst some of the game’s most beautiful forests and grasslands. Minding its own business.

Perhaps it’s the setting, but this was one of the hardest animals to kill/harvest like a greedy butcher in the entire game. From an emotional standpoint, at least.

The agile and deceptively dangerous Legendary Cougar concludes the first half of this list.

You’ll find it prowling around the northern reaches of the map, directly above the first “T” in the “Gaptooth Ridge” annotation.

Unfortunately, unlike Far Cry 5’s Peaches, it’ll take more than a few slabs of meat to subdue this ferocious feline.

To the east of the railway lying in between the “A” and “R” of the “Scarlett Meadows” map annotation, you’ll find the Legendary Coyote.

It’s a rather wily foe (couldn’t help myself), so beginning the hunt with a full Dead Eye metre and a decent rifle might be advisable. Assuming the rifle wasn’t made by Acme, of course.

Given its imposing size, finding the Legendary Elk shouldn’t be too hard; once you know its rough location (due east of Bacchus station).

However, its size can prove to be quite problematic if you get too close during the latter stages of the hunt. Not to mention its huge antlers.

Might be best to keep a safe distance at all times with this one.

Fantastic Mr. Fox’s 19th century ancestor (we presume) inhabits the area just south-east of Mattock’s Pond. If you hit the road on that side of the pond, you’ve gone too far.

Although the quest prompt to bring down the Legendary Fox should appear before during the course of your exploration. Unless you get really unlucky.

You’ll find the Legendary Moose on the north-west bank of the Brandywine Drop. Opposite Willet’s Rest in the east and Downhill in the west.

If you need a little more assistance triangulating its position, remember, there’s s also a road just south of the Moose’s territory.

The Legendary Pronghorn is the southernmost of all the animals on this list, located, as it is, between the Rio Del Lobo Rock in the east and Fort Mercer in the west.

It’s marginally closer to the Rio Del Lobo Rock, making this the best staging post for the ensuing hunt. Head west until you see its characteristic horns or the quest marker appear on your HUD.

There aren’t any major towns on landmarks in the immediate vicinity of the magnificent Legendary Tatanka Bison. So, pinning it down can be a bit tricky.

Our advice would be to head directly south from the Stillwater Creek map annotation, exploring the area just south of the first set of train tracks you come across.

The Tatanka Bison should be somewhere around here.

In direct contrast to its fellow bovine, the Legendary White Bison is surrounded by landmarks.

Specifically, you’ll find it next to Lake Isabella in the western half of the Grizzlies West, north of Mount Hagen and adjacent to Beartooth Beck.

It’s pretty conspicuous, due in no small part to its large size and distinctive white coat.

Finally, we have the Legendary Wolf.

Travel to the Cotorra Springs and head ever so slightly east of the southernmost pool (just north of the train tracks).

Here, you’ll find the Wolf you seek. Though make sure you’re armed and prepared for the confrontation; it won’t go down without a fight.

Looking for the best cheats? Need help losing the local sheriff? We’ve got plenty of other guides to Rockstar’s Red Dead Redemption 2 on site.