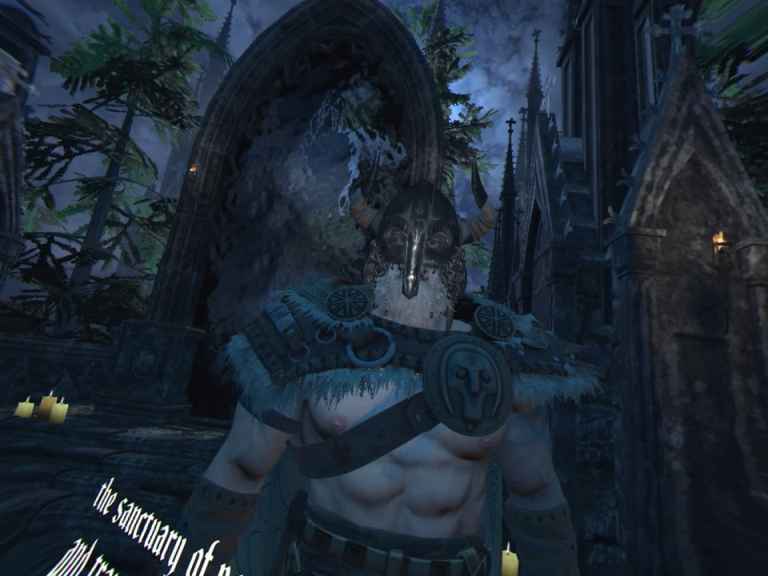 If you are anything like me, when you look at a game’s promotional materials and you see things like flaming swords and chain mail, your mind immediately starts excitedly screaming “RPG! It’s and RPG!”. And when one of these games shows up in the RPG-starved PSVR market, it can be doubly exciting. But in the case of Shadow Legend VR, I had to tell my wildly excited mind to cool its jets. While there are RPG elements in Shadow Legend VR, and it does certain things better than lauded games like Skyrim VR(!), an RPG this ain’t.

Instead, thinking of Shadow Legend as a 3-D adventure game with some action and RPG mechanics will put you in a much better mindset to enjoy this interesting and surprising VR title. Shadow Legend is very fun, but you have to accept it for what it is – a rocking little fantasy adventure made by some folks that clearly love D&D.

Shadow Legend VR – The Joy Is In The Details

It would be overly reductive to refer to Vitruvius VR‘s Shadow Legend as a “tech demo” (I have grown to loath that term in relation to VR games), as Shadow Legend VR is much more than that. This is a full length game (in the VR space, at least). Though, on some level, Shadow Legend VR does feel like a proving ground for VR mechanics, with this smaller studio showing the big guys how certain things can be accomplished with smashing success. Throughout the game’s four- or five-hour length, I continuously wondered what these folks could pull off with a fifty-million-dollar budget.

In the opening moments of Shadow Legends, it becomes clear that the dev team at Vitruvius had a lot of fun designing cool things for players to try out, without tying them to the story or rewards. They created cool mechanics, and then just left them laying around the environments for players to discover and engage in (or not).

You can play fetch with a dog, shape molten ore into steel bars, sharpen swords on a spinning stone (this one makes your damage go up!), and smoke a pipe; the list goes on. These objects and activities are strewn about the environment, ready to be discovered and toyed with if the player so desires. These optional actions go a long way to fleshing out Shadow Legend, making it feel more like a living environment and less like a stiff game space.

All of this adds up to a realistic feeling world – which I would like to explore far beyond the boundaries of what Shadow Legend VR offers. I would happily spend tens of hours playing an epic-sized game realized with this level of interactivity and detail. In fact, someone ought to hire this team to go back and patch some of their functionality into Skyrim, because activities like these in Shadow Legend go a long way towards bringing VR worlds to life.

The meat of Shadow Legend VR really lies in exploration and puzzle solving. As the story progresses, new environments open up for the player to explore. Hidden in each environment is a number of runestones – and hunting down these elusive prizes is how I spent most of my time in Shadow Legend. As the use of advanced weapons in the game is gated depending on the number of runes found (and trust me – you really want the advanced weapons), players need to take the time to fully explore each space.

Runes can be hidden literally anywhere, and simply finding them is only half the battle. Once spotted, the challenge sometimes lies in how to reach the runes to pick them up (pro tip: sometimes you don’t go to the rune – the rune comes to you).

Poking around these environments can be fun and rewarding, and there are usually a couple of fun side activities for you to try out if you like. In addition, treasures like coins, chalices and gems are hidden liberally about (or just laying in the open), so snatching up gold and goodies can keep you occupied while you puzzle out how to progress.

In addition to finding runestones, other optional puzzles are scattered about the play areas. Some are flagrant – word puzzles to open doors, for example – while others are less obvious. Like much of Shadow Legend, these puzzles feel like the development team adding content and value to what could have been a simple walkabout.

While combat opportunities in Shadow Legend VR are limited (you aren’t exactly up to your ears in enemies), when it does occur, combat is fun and engaging. Enemies tend to approach in a straight line, which makes it easy to remain oriented towards them. Players are initially equipped with a sword and bow, but this inventory continuously upgrades as the game progresses.

Players can block incoming attacks from enemies, then use the opening created to whack away at bad guys, with damage appearing numerically as each strike lands. It is technically possible to do the old “VR waggle” in combat, but Shadow Legend wisely includes a mechanic to discourage such behavior. The game actually registers how hard you are hitting, increasing damage done for harder strikes. This makes it beneficial to pull back and swing as hard as you can; waggling is not the most efficient way to win.

Additionally, Shadow Legend VR encourages precision by allowing players to shatter enemies’ shields, sever limbs, and even decapitate bad guys in the heat of battle. In a nice touch, I discovered that you can pick up severed heads and throw them around – always a treat.

Enemies mostly attack one at a time – two at most – and every encounter slows down time a bit, making the slow-motion combat in Shadow Legend relatively simple, but still fun and rewarding. In fact, I found the combat in Shadow Legend to be much more engaging than that in other games (like the aforementioned Skyrim VR) because it actually required me to pay attention a little bit.

About midway through the game, ranged enemies start appearing, which adds a new level of challenge. It’s great fun to knock projectiles out of the air with shots of your own, but sometimes the hits you do take feel a little cheap. The controls in Shadow Legend VR are not quite up to where they need to be to succeed against ranged guys, and the baffling decision to place the turn buttons on the opposite controller from the teleport button left me fumbling through the duration of the game.

The Story In Shadow Legend VR Is Not The Point

The story in Shadow Legend VR is probably the least important part of the game, but is does serve as basic connective tissue to string together the various settings. The player takes the role of the Grand Master of the Knights Templar – which will burn itself into your mind when you hear “Watch your footing, Grand Master” for the 500th time.

Some angel lady appears and prophesizes the appearance of a bad guy. The bad guy shows up and kills a bunch of people. The angel lady stabs you with a sword so you can follow the bad guy to the underworld, which looks like a cemetery. This is about the point where I checked out, realizing that I didn’t care, and it didn’t matter.

What does matter is that Shadow Legend VR has a good inventory system, a decent quest log, and it’s fun to shoot stuff with a crossbow. I also enjoy slapping friends and allies (and dogs, and horses) with my sword and watching open wounds appear on their faces while they try to talk.

Again, I don’t want to call Shadow Legend VR a proof of concept – it is much better than that. But what Shadow Legend communicates above all else is that Vitruvius VR is a talented development house with a lot of tricks up its sleeves.

Sometimes simple is better. I would rather have a simple game that works very well than a complicated game that is a mess. Though not overly complex, Shadow Legend VR is an interesting game, worthy of VR players attention for the numerous innovative ways that it demonstrates how to translate real world activities into the VR space. It is also quite fun. This game firmly establishes Vitruvius VR as a team to watch, as Shadow Legend VR performs a lot of gaming functions better than other similar games on the market.

Shadow Legend VR is available January 21, 2020 on the PlayStation Store.

Shadow Legend VR is a modest adventure title with a sprinkle of action, though it hints at a giant world hiding outside of what the player sees. Every mechanic in the game works well, from the exploration to the combat. Shadow Legend VR is recommended as a demonstration of the interactivity that VR can offer, couched in an enjoyable fantasy adventure. This is one of the better fantasy VR titles available on PSVR.