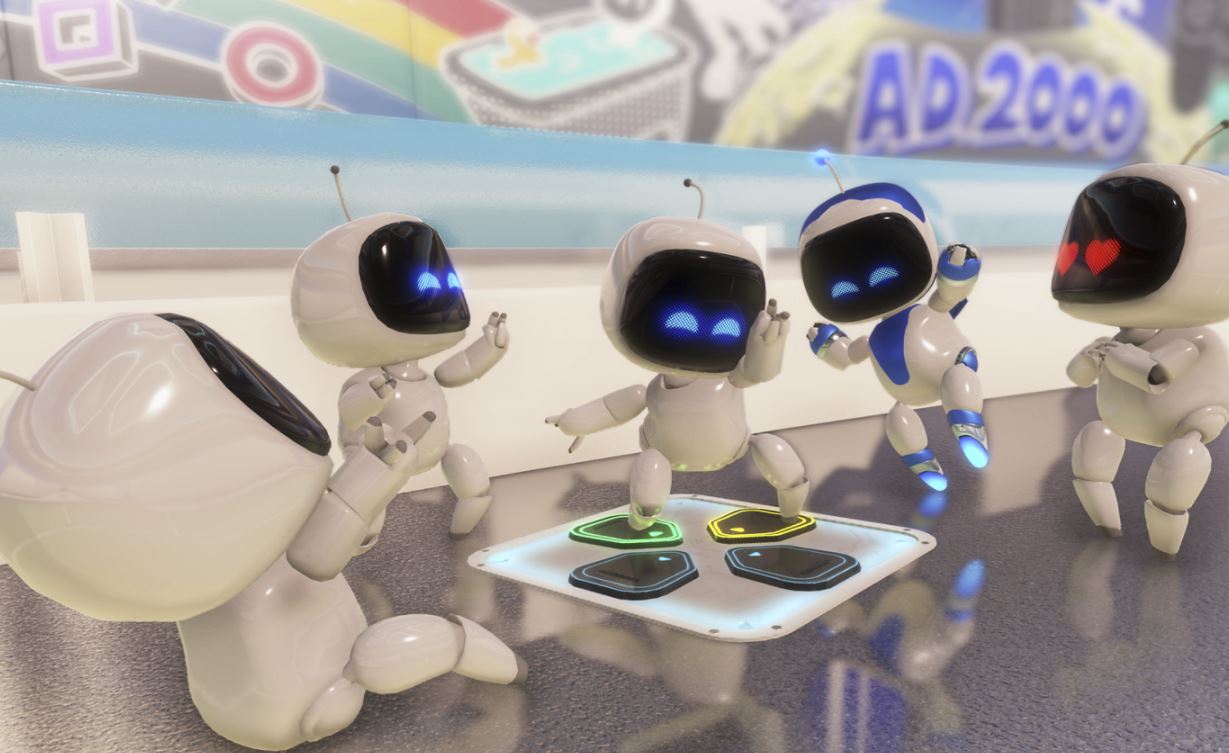 Astro’s Playroom PS5 Review. Can ASOBI Team, the developers responsible for Astro’s Playroom, do no wrong? After giving us probably one of the very best PSVR games ever with the superlative Astro Bot: Rescue Mission, they’ve pulled it off once again with Astro’s Playroom on PlayStation 5. The difference this time however, is that the stakes are much, much higher.

Whereas Sony’s PlayStation VR headset was fortunate enough to host a number of essential titles early on and before Astro Bot: Rescue Mission came along, on PS5, Astro’s Playroom is almost certainly going to be the very first game that eager gamers will play on their next-generation PlayStation console thanks to its pack-in status. No pressure.

From the very first second you start up Astro’s Playroom for the first time, a barrage of saccharine infused pixel sweetness absolutely batters you in the face. With the super cute Astro Bots anchoring moments of warm charm, comedy and outright laughter, it’s a wonder how the big screen, fist-magnet Minions have managed to take over the world as the mascot of choice for the young and well, mad.

On that topic, the main character Astro is simply a joy to behold. Animated with a whimsical, almost child-like excitement and wonder at the world that is borne out of every step, jump and action that the little bot takes, Sony’s robotic mascot might well be their most underappreciated. Charmingly, if you leave the plucky little robot idle they’ll pull out a Vita and start playing, or strap on a tiny PSVR headset. Honestly, isn’t it time for Astro to be in their own full price, full fat game? Yes. Yes it’s time.

A third-person, three-dimensional platformer that carries on the sublime work that ASOBI Team wrought with Astro Bot: Rescue Mission, Astro’s Playroom has something of a novel setting to say the least. Literally dropping players inside of a PlayStation 5, Team Asobi reimagines the innards of Sony’s latest lump of gaming silicon and plastic as a series interconnected and colorful worlds that play off the cutting edge attributes of the console.

From the sands wept beaches, Sega blue skies and frigid ice lakes of Cooling Springs to the thick undergrowth and towering peaks of the GPU Jungle, each of the four main worlds in Astro’s Playroom offers a playful take on the technical make-up of Sony’s next-generation console. Here, the goal is not only to reach the end of each level, but to collect golden coins (emblazoned with the PlayStation logo, naturally), jigsaw pieces to complete artworks and scoop special artefacts.

A true love-letter to all things PlayStation, Astro’s Playroom is absolutely stuffed full of Easter eggs for the player to discover. From the lovable bots who can often be seen mimicking scenes from legendary PlayStation franchises such as The Last of Us, Infamous and more it’s clear that a whole lotta love has been poured into this title. Oh and there are some truly incredible Easter eggs that are absolutely jaw-dropping and as such, you should aim to go as blind into Astro’s Playroom as you possibly can.

Then there are the those special artefacts. Ultra detailed replicas of PlayStation hardware and accessories spanning more than 25 years of Sony’s history in the industry and ranging from the PSOne console all the way to the PlayStation 5 and covering everything in between, such as the obscure PS TV, PocketStation and more, these lovingly realised artefacts are more than enough incentive to explore every nook and cranny of each gorgeous world in Astro’s Playroom.

Even better yet, you can opt to view all of your collected artefacts away from the main game itself and just marvel, slack-jawed, at just how accurately Team Asobi have been able to recreate your favourite PlayStation consoles and accessories.

Speaking of replayability, the manner in which Astro’s Playroom divides its four worlds up into four smaller stages still is important because as much as the game is a showcase for the DualSense controller (something I’ll get to shortly), it’s also something of a great demonstration for the PS5’s Activities feature too. Imagine you’re tearing through GPU Jungle and have scoured the entire world of all the collectibles but then you recall that you’ve missed an artefact somewhere on Cooling Springs – all you need to do is hop into the activities menu, go to the Cooling Springs card and hit resume and then three second later you’re there.

Similarly eye-opening is the extent to which Astro’s Playroom makes the most of the PlayStation 5’s DualSense wireless controller. A fantastic introduction to the new immersive capabilities of Sony’s latest pad, Astro’s Playroom generously leverages the adaptive triggers and the sensation is both immediately and wholly satisfying. Whether you’re pulling a cable out of the ground or pulling a bowstring taut, you can actually feel the tension and resistance building up in the triggers in a way that just hasn’t been possible until now.

The haptic feedback capabilities of the DualSense controller are given ample time to shine too. I marvelled at how I could feel through the pad grains of sand dusting around Astro’s feet, while another more subtle, but no less eye-opening implementation of the technology was experienced when Astro was ice-skating on a glacier and the feeling of the ice skates craving through the ice would oscillate between one side of the pad and the other depending on what which feet were touching the ground. It’s astounding stuff for sure.

Brilliantly, while each of the four worlds encompass a fair old chunk of what you could call ‘regular platforming’, so too does it have it have sections that zero in on each of the features of the DualSense controller. In one example, Astro zips up into a suit that essentially turns them into a massive ball bearing, enabling the player to propel them in a particular direction simply by brushing a finger across the DualSense controller’s much more sensitive touchpad.

In another, the gyroscopes in the DualSense controller are used by a mech-monkey suit that Astro discovers, with the player titling and squeezing on the adaptive triggers to grip hand-holds and make their way up a towering mountain. It’s astounding stuff for sure.

As much as Astro’s Playroom is very much a showcase of the DualSense controller and a delectable marriage of twee characters, supremely clever Easter eggs and PlayStation iconography, so too does it also happen to be an resoundingly solid platformer that nails the fundamentals of the genre with the sort of flair and verve we just haven’t seen in a long, long time.

Bolstered by a never flinching, liquid smooth 60 frames per second presentation, guiding Astro around each of the worlds is nothing less than an unbridled joy as he instantly responds to your commands to walk, run and jump with ease. Elsewhere, the levels are constructed with a practised and talented hand too, with a very steady increase in the difficulty curve that makes Astro’s Playroom not only a wonderful introduction to the PlayStation brand and the PlayStation 5 console itself, but also gaming in general.

A joyous toybox of a game that never fails to elicit a smile, the only real complaint that I have is that it’s simply too short and even then such observations feel churlish on account of Astro Playroom’s pack-in status.

Like Astro Bot: Rescue Mission before it, the soaring calibre of Astro’s Playroom is such that calls for PlayStation’s plucky new robot mascot to have his own, fully-featured and full length game must surely now be deafening. Astro’s star power aside, Astro’s Playroom should absolutely be your first stop after your PlayStation 5 console comes to life for the first time – you won’t regret it.

Astro’s Playroom releases with every PS5 console starting on November 12, 2020.

With its much hyped status as a showcase of the DualSesne controller’s fancy new haptic feedback and adaptive triggers, it’s equally important to recognise that like Astro Bot before it, Astro’s Playroom is a fundamentally excellent platformer that commendably stands on its own merits. Equal parts a stirring demonstration of the capabilities of the DualSense and PS5 console as it is an excellent traditional platformer, Astro's Playroom might just be the best pack-in title of all-time.