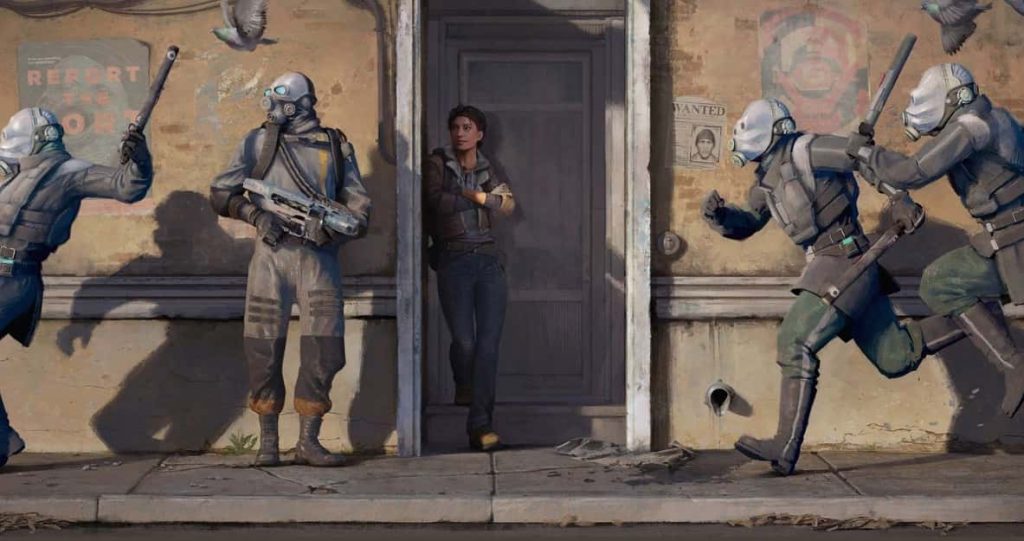 Is Half-Life Alyx PS4, PS5 coming to PSVR? Sure, it’s not Half-Life 3, but Valve has confirmed that it is indeed beavering away on a new installment in the seminal franchise, this time for virtual reality platforms. Still, it’s got people thinking about a possible Half-Life Alyx PS4 release and a possible new Half Life PS4 title.

Right now there’s few details available on the game, but it appears that a Half-Life: Alyx PSVR release isn’t currently on the cards. Valve’s Tweet on the game showcases logos for a number of VR platforms, including Steam VR, but Sony’s headset is conspicuous by its absence. As it is Half-Life Alyx for Oculus Quest and Half-Life: Alex for Vive Index would appear to be the main platforms.

However it looks like there could be some hope, as Push Square directly asked Valve whether or not the highly anticipated title would ever make it to PSVR – and this was Valve’s response:

“Designer Greg Coomer reconfirms that the “initial” release of Half-Life: Alyx will be “available for SteamVR only”. It definitely sounds like Valve is aware of the desire to see the game come to PSVR, however: “We believe Sony’s VR platform has been a huge success for the medium, and we assume that lots of Sony customers would love to experience this new chapter of Half-Life.”

Coomer goes on to confirm that a PlayStation VR port is not in active development “because we’re very focused on the initial release”. Having said that, he concludes that Valve has “not ruled anything out”.

So yeah, while we perhaps shouldn’t expect Half-Life: Alyx PSVR to arrive this generation, it would instead make more sense for the game to arrive when the much more powerful PS5 and less technically limited PSVR successor lands – not least because PlayStation gamers would then be able appreciate the title in a much better light.

What Is Half-Life: Alyx?

Valve has described Half-Life: Alyx as its ‘flagship VR game,’ so it’s obviously going to be a pretty big deal.

The official synopsis for the game is thus:

Set between the events of Half-Life and Half-Life 2, Alyx Vance and her father Eli mount an early resistance to the Combine’s brutal occupation of Earth.

The loss of the Seven-Hour War is still fresh. In the shadow of a rising Combine fortress known as the Citadel, residents of City 17 learn to live under the rule of their invaders. But among this scattered population are two of Earth’s most resourceful scientists: Dr. Eli Vance and his daughter Alyx, the founders of a fledgling resistance.

You and your father were relocated to City 17. In the years since, you’ve continued your clandestine scientific activity—performing critical research, and building invaluable tools for the few humans brave enough to defy the Combine.

Every day you learn more about your enemy, and every day you work toward finding a weakness.

Lean around a broken wall and under a barnacle to make an impossible shot. Rummage through shelves to find a healing syringe and some shotgun shells. Manipulate tools to hack alien interfaces. Tear a headcrab off your face and throw it out the window. VR was built for the kind of gameplay that sits at the heart of Half-Life.